Andrew Heaney had several teams that wanted to sign him.

The Rangers believe they were one of at least 10 clubs that were seriously courting the left-hander before he agreed to their two-year offer Dec. 6 and signed it last Friday.

He was introduced to the media Thursday at Globe Life Field, minus the fanfare of the Jacob deGrom intro. But for those scoring at home, Heaney spoke longer.

One of the first things he said was that he chose the Rangers because they told him how they could help him be a better pitcher. That was the same sort of thing right-hander Jon Gray said last year when he signed his four-year contract.

For Gray, the Rangers changed the grip on his slider. It was a small change, but Gray believes it made him a better pitcher.

Heaney would like to be less reliant on the strikeout, though that would still be a big weapon for him. But he wants to be more efficient by getting outs early in counts.

That’s where the Rangers come in.

Heaney piled up 13.62 strikeouts per nine innings last season with a fastball and a slider. He walked only 19 batters in 72 2/3 innings, and his ability to pitch with his fastball will be a nice fit with pitching coach Mike Maddux.

Heaney thinks his changeup could help him get out of innings with fewer pitches and work deeper into games.

“We just got a tour of the place and understand the facilities and the instruments and abilities of all people here to help me do that,” he said. “I’m excited to get to work.”

The final day of the 2022 international signing period arrived Thursday, and the Rangers got one in at the wire.

They signing Cuban catcher Danell Figueroa for $100,000. The 18-year-old defected from Cuba in March.

A Rangers official described Figueroa as a strong-bodied defense-minded catcher, but he isn’t just all glove. He has good bat-to-ball skills and above-average power.

Figueroa is the last of a class that includes outfielders Anthony Gutierrez and Jose de Jesus. The Rangers thought that Gutierrez was one of the three best players in the class, and he is regarded as one of their top 20 prospects.

The next international signing period begins Jan. 15. The Rangers have been linked to Bahamian shortstop Sebastian Walcott, who is already 6-foot-4 and 190 pounds. He is expected to get around $3 million.

General manager Chris Young said it himself Thursday: The Rangers are starting to move away from rotation additions.

He must have known that the Yankees would be signing free agent Carlos Rodon.

The deal is apparently for six years every effort to sign the left-hander, who reportedly agreed to a six-year, $162 million deal. If there was a team out there that would wildly throw money at a pitcher, it was the Yankees.

With the Rangers content with the rotation and Rodon headed to New York, there’s no longer any need to save this card for a later date. 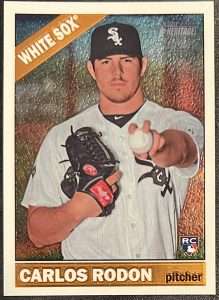 It’s a really good set that includes rookies for Ronald Acuna Jr., Francisco Lindor, Kris Bryant and Gallo, among others. I’m sitting on a couple of the Acuna cards. Gallo, too.

Rodon has parlayed consecutive healthy (and effective) seasons into a massive payday. He was highly regarded out of North Carolina State and even as he dealt with some injuries and struggled with the White Sox.

The Giants benefited from him figuring things out the past two seasons. Now, Rodon gets to pitch under the intense spotlight that comes with the Yankees.

She just came back from ballet class.. 😂 pic.twitter.com/8NWmr1Bojy

Previous Article
Rangers’ focus shifts away from rotation after Andrew Heaney signing
Next Article
The Sunday Read: A 10-deep look at Rangers’ starting pitching (for now) for 2023