No one wanted to jinx his chance at the 24th perfect game in MLB history.

He hadn’t allowed a base runner after five innings and then after six. Only one other pitcher this season, some guy named Clayton Kershaw, has done that (Kershaw made it through seven).

Chas McCormick took care of the perfect game with a double to start the seventh and then scored on a two-out single by Yordan Alvarez.

Perez was at only 76 pitches when the Rangers put together three singles and a sacrifice fly against Justin Verlander to tie the game at 1. The rally, though, led to a long half-inning, and coaches felt it was too long for Perez to return.

Some fans think that is what cost the Rangers in an eventual 3-2 loss. Some also think that removing Glenn Otto in the fifth inning Wednesday was the wrong decision. He was at 79 pitches.

More and more fans don’t like that the Rangers haven’t unleashed their starters three weeks into the season, even though they had ample warning this was the plan.

Perez said he could have started the eighth — all pitchers would have said that — but respects manager Chris Woodward’s decision. Perez wants to go deeper, and Woodward wants all starters to go deeper.

The Rangers have just about reached the point where the leash is off. There will be exceptions, like for Spencer Howard and potentially Otto if he gets another start before Jon Gray comes off the injured list.

Gray might have to go short once or twice after two IL stints.

But it’s not always about pitch counts early in the season. Another factor is the number of times a starter gets up off the bench and returns to the mound.

Perez had seven of those “ups,” including the time between his pregame bullpen session and the start of the game.

Woodward said there were scenarios in which Perez would keep going, but a tie game wasn’t one of them. Bush has been a steady bullpen contributor, so it’s not like the Rangers turned the game over to the guy selling hot dogs in section 235.

It just didn’t work out.

Long story short: The early removal of starters isn’t something Woodward likes to do. He’s doing it in the aftermath of the lockout and a shortened spring training.

He and the club officials said since before the lockout ended that they would not jeopardize pitchers’ health by asking them to throw more than they were built up to do.

It would be more aggravating if Woodward were to let a starter go too long, get injured and miss two months.

Fans don’t have to like these short starts, and neither do writers, but, in theory, they should only have to dislike them for a few more games.

The flap about removing Perez after seven innings is taking away from the fact that he looks as if he will be a good offseason acquisition for only $4 million.

The left-hander is the only starter who has gone six innings, doing so twice, and he’s logged the rotation’s only two quality starts of the season. He said he isn’t doing much differently than late last season, when he fell off in Boston and was demoted to the Red Sox’s bullpen, but is focusing more on first-pitch strikes.

When Perez keeps his mind clear on the mound, something he said he has grown into, he can execute pitches when he needs them.

He has shown spurts of greatness in the past. He had never opened a game with six perfect innings, but that doesn’t rate as the best performance of his career.

In his fourth start back from the surgery in 2015, the day after Cole Hamels made his Rangers debut, Perez took a one-hitter into the ninth, but was removed after allowing a one-out double. He was at 80 pitches.

There was uproar then, too, especially since Sam Dyson allowed the inherited runner to score and nearly blew the save.

The Rangers’ celebration of their 50th year in Arlington continues this weekend with three giveaways — a pack of cards Friday, a Jim Sundberg bobblehead Saturday and a Nolan Ryan pitching rubber Sunday.

Two of them fall into three of the above categories, and theirs were the first two cards in my pack. I went with the first one, Ferguson Jenkins, because A) he was on top of Gaylord Perry and B) he still has the best season by a Rangers pitcher.

So, the Card of the Week this week is the 2022 Fergie Jenkins Texas Rangers 50th Anniversary card. 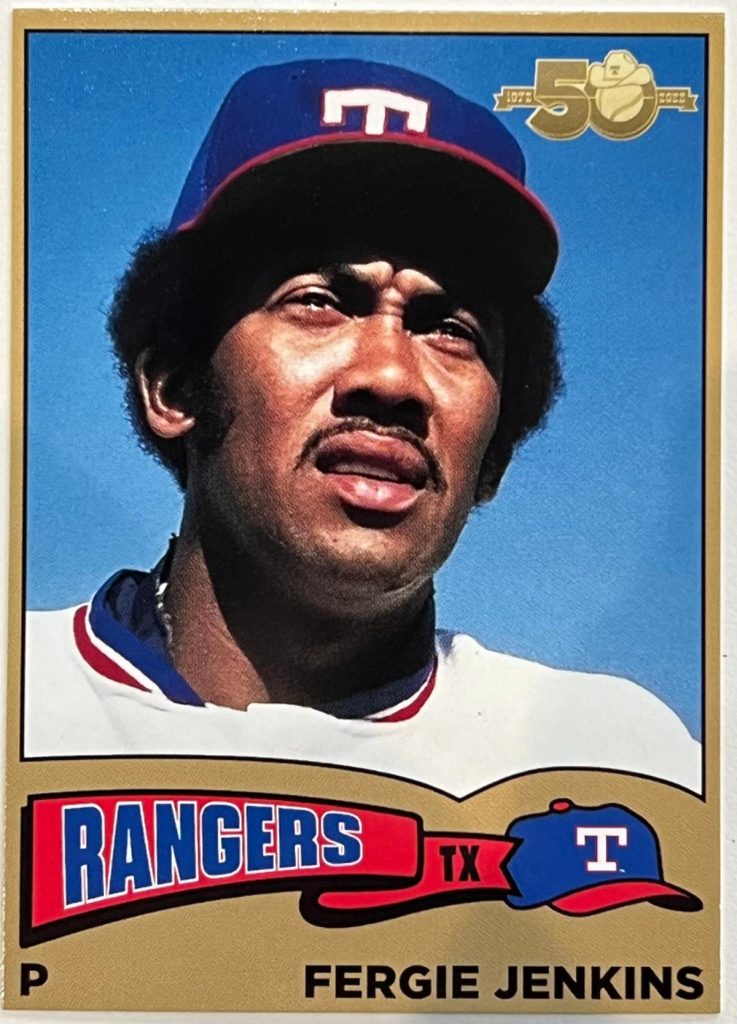 And the best season in Rangers history? Jenkins went 25-12 in 1974 with a 2.82 ERA and 29 complete games, but finished second in Cy Young voting to Oakland ace Catfish Hunter. Nolan Ryan was third with California, and Perry was fourth while pitching for Cleveland.

Sometimes we all need someone to carry us. Enjoy. See you Monday.