ANAHEIM, Calif. — Games tend to speed up on a developing player, especially when things start to go south.

Spencer Howard has experienced that more than he would have liked as a major-league pitcher.

In trying to come up with a way to hit the brakes, Howard said an idea came to him out of thin air before his start Thursday night.

“My only thought going in was try to move as slow as possible,” he said.

Howard stuck to his yellow-light theory over five scoreless innings, allowing only three hits and striking out five, and the Rangers did just enough offensively against Shohei Ohtani to upend the Angels 2-0.

Pitching on his 26th birthday, Howard turned in the best performance of his career.

“Best outing I’ve seen him throw,” manager Chris Woodward said. “Just the composure and the stuff. I could tell from Pitch 1. He’s been building up to that.”

Nate Lowe collected a home run and a triple, and Corey Seager had an RBI double among his two hits. Seager also left the game in the fifth inning as a precaution after fouling a ball of his right leg during the at-bat in which he doubled to make it 2-0.

Woodward said that Seager’s leg was swollen and might cost him a game or two, but the initial indication is that Seager will not need the injured list.

That was all Howard, Brock Burke, Matt Bush and Matt Moore needed, though the Rangers should have scored more than two runs against Othani. They loaded the bases in the first inning only to see him wiggle free. Lowe started the sixth with a triple, but Ohtani kept him there.

Eight of the Rangers’ 10 hits were against Ohtani.

“I thought we were going to punch him in the mouth early on, but he showed his teeth,” Woodward said.

Howard threw only 76 pitches in arguably his most efficient outing. Considering the state of the bullpen, it might have made sense to let Howard go another inning.

He has never gone past five innings in his MLB career.

“He had that pitch count right around the 80 mark, and that was what we kind of set,” Woodward said. “He’s got to earn more than that. I think it’s just more or, ‘Hey, you did your job.’ We always try to get more and more out of guys, and you put them in a bad spot.”

Howard, though, might have struck on something with slowing himself down.

“I wouldn’t recommend it to anyone else, but it works,” Howard said.

Rangers prospect Josh Jung played in his first game on rehab assignment Thursday night, going 1 for 3 as the designated hitter for the Arizona Complex League team.

Jung underwent surgery Feb. 23 to repair a torn labrum in his left shoulder, ending his chances at being the Rangers’ Opening Day third baseman. He started hitting off of pitching machine earlier this month and starting taking live batting practice last week.

The Rangers’ first-round pick in 2018 (eighth overall) has been taking grounders at third base and could be allowed to play defense this season, which the Rangers had ruled out immediately following the surgery.

Jung will likely head to Triple A Round Rock no later then the middle of August after building up in Arizona. The Rangers have not ruled out Jung making his MLB debut this season.

Jung was pushed along while rehabbing by Arizona rehab coach Keith Comstock, who might be the most revered Rangers employee. The players who have had extended rehabs would likely agree with that.

Comstock was a big-league pitcher once upon a time, and he dealt with the yips during his career. He understands the struggle rehabbers are facing.

So, he brings the energy and keeps things light whenever possible.

Speaking of light moments, his 1989 ProCards Las Vegas Stars card is pretty light. It’s the Card of the Week, and it speaks for itself. 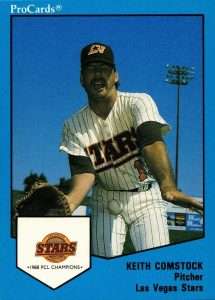 Keep your feet beneath you this weekend. Enjoy. See you Monday.

Here’s an instant replay of a dog running way too fast… 🐶🤣 pic.twitter.com/UDIqv7CYM2