If a team is going to have an off day on the road, New York isn’t a bad place for it to happen.

The Texas Rangers spent their Thursday doing whatever the heck they wanted in the Big Apple after a two-game sweep Tuesday and Wednesday of Philadelphia.

Up next is a three-game series at Yankee Stadium, and a reunion with three very familiar faces — Joey Gallo, Isiah Kiner-Falefa and Jose Trevino.

They have also made an impression with Yankees fans, though not necessarily a favorable one in one case.

Gallo continues to struggle, batting only .188 with three home runs. He has been warming up of late, though it wouldn’t have taken much. This isn’t the first time the Rangers have seen Gallo in pinstripes, having visited the Yankees last season after he was shipped away July 30.

Kiner-Falefa and Trevino were traded in March. Kiner-Falefa was sent to Minnesota for Mitch Garver, and the Twins flipped him to New York a few days later. Trevino went toward the end of spring training after the Rangers decided they wanted Jonah Heim to be Garver’s backup.

Both former Rangers are faring well.

Kiner-Falefa is playing regularly at shortstop, where he has helped shore up the Yankees’ defense while also batting .295. Trevino is scuffling at the plate, hitting only .161, but the Yankees have been impressed with how well he manages a pitching staff and frames pitches.

Gallo is a free agent after the season and would be open to returning to the Rangers. He never wanted to leave, but the Rangers and agent Scott Boras were far apart on a contract extension in July. After sensing the wouldn’t be able to reach a deal, the Rangers moved to trade him.

The package included right-hander Glenn Otto, who will start Friday for the Rangers.

Outfielder/DH Willie Calhoun was in the starting lineup Thursday for Triple A Round Rock, playing left field and batting third at Reno. He went 0 for 3 with a walk and a run scored.

It was his first game since he was demoted Sunday and said that the only reason he would report is to make himself more attractive in a trade. He said the swing changes the Rangers want him to aren’t a fit, and the club saw him reverting to his old swing.

Trading a player with a career -1.5 WAR is a tall task, and the Rangers don’t think they can pull off.

So, Calhoun could play for the Rangers again this season. However, it would become a strong non-tender candidate after the season.

Lost in the Rangers taking 2 of 3 last weekend from the defending world champions and Ron Washington turning 70 was that Ronald Acuna Jr. is back with the Atlanta Braves after a torn ACL last season.

The Wilson clan went to the Friday game, as the boy is a big Acuna fan, and … he didn’t play. Alas, the night was saved when Austin Riley threw a ball into the crowd and the boy caught it.

So, he’s now a big Riley fan. The problem is we don’t have a Riley rookie card, so Acuna’s 2015 Topps Heritage rookie is the Card of the Week. 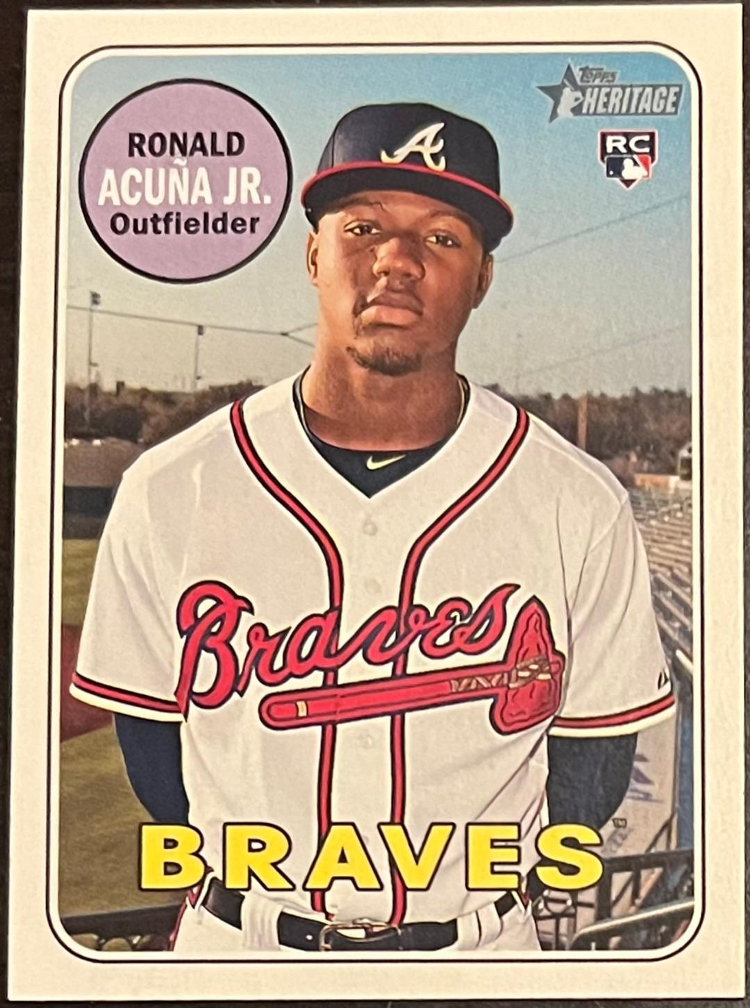 He looks as if he would rather be doing anything other than posing for a picture.

Acuna, of course, is the older brother of Rangers prospect Luisangel Acuna, who returned to action Thursday night after missing about month with a hamstring injury.

Here’s hoping you find a place to crash his weekend. Enjoy. See you Monday.

Previous Article
Thursday Newsletter time: It was too early to panic then, and it’s too early to celebrate now
Next Article
Friday on the Farm: Three hot Rangers minor-leaguers not named Leody Taveras, and three cold ones

Friday on the Farm: Three hot Rangers minor-leaguers not named Leody Taveras, and three cold ones
Jeff Wilson May 6, 2022