The 12-year-old son of Texas Rangers manager Chris Woodward is a huge Shohei Ohtani fan, and the story is that he told his dad the Rangers pretty much had no chance Thursday night.

Ohtani, the reigning American League MVP, was on the mound for the Angels in the opener of a four-game series at Globe Life Field. The guess here is many gamblers were of the same mindset as Grady.

The caveat was, baseball. Anything can happen, and the Rangers bucked the odds and took care of Ohtani and the Angels 10-5.

Ohtani? He allowed six runs in 3 2/3 innings, surrendering the first grand slam of his career to Jonah Heim in the second inning. It was Heim’s first career slam, and he knocked in another run against Ohtani with a fourth-inning single.

The Rangers’ performance gave their manager the perfect opportunity to smack-talk his son.

Woodward is taking the high road, which, obviously, he should.

“That was a win for us. He can live with that,” Woodward said. “It’s his favorite player. I’m sure Shohei will come back and want revenge on us tomorrow, so I’m not going to say anything bad.”

Woodward said before the game that Ohtani was kind enough last season to autograph a jersey for Grady.

Busy Friday at the ballpark

Friday is Jackie Robinson Day, and the Rangers will join the other 29 MLB teams in recognizing the 75th anniversary of the day the Hall of Famer broke baseball’s color barrier April 15, 1947.

Players and the coaches staff will wear Robinson’s No. 42, and other activities have been planned.

Opal Lee, known as the “Grandmother of Juneteenth” for her efforts in making Juneteenth a national holiday, will throw out the ceremonial first pitch. She will be accompanied by former Rangers stars Ferguson Jenkins and Al Oliver.

The team will host black community leaders and give them copies of Lee’s book about Juneteenth. The Rangers are also hosting kids from the Rangers Foundation’s Just Keep Livin programs and those who took part in the Texas Rangers MLB Youth Academy Breaking Barriers Essay Contest.

Also, proceeds from the Texas 2 Split Raffle will be donated to the Jackie Robinson Foundation and The Players Alliance.

The first 15,000 fans will receive a Charley Pride bobblehead, which depicts the country music star and longtime friend of the Rangers performing one of his famous clubhouse concerts. Pride passed away in December 2020.

His son, Dion, will perform the National Anthem.

Friday is also the 50th anniversary of the Rangers’ first game after the move from Washington, a 1-0 loss to the Angels in Anaheim. Several former players will be at the ballpark Friday and Saturday, including Rangers Hall of Famers Jenkins, Tom Grieve, Toby Harrah and Jim Sundberg. So will Al Oliver, Jeff Burroughs, and Dick Bosman, who started the game 50 years ago in Anaheim.

Bosman will also throw out a ceremonial first pitch Friday.

Rangers Today subscriber and all-around good guy Anthony Andro once again has made a contribution to my son’s card collection, though nothing will top the Mike Trout rookie card he gave us before the card boom. It graded as a BGS 9.5, by the way.

The latest contribution is noteworthy based on Thursday night’s game. Well, I guess the Trout rookie is, too, after his 472-foot first-inning blast.

The Heim grand slam and career-high five RBIs is where I’m going.

The Card of the Week this week is the 2021 Panini Prizm Jonah Heim rookie auto. 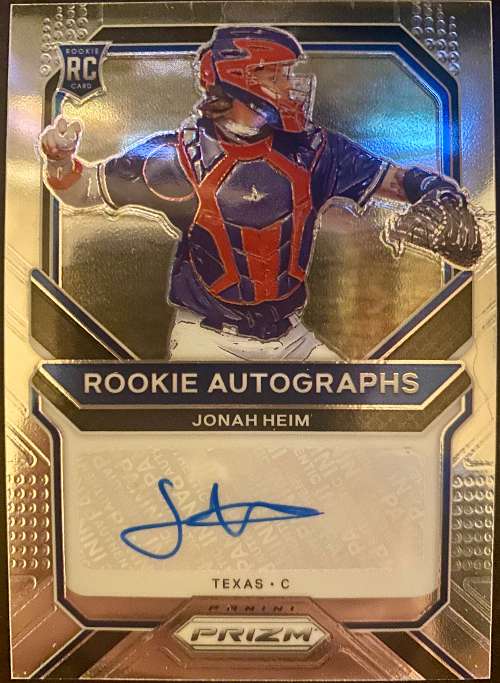 I like Panini’s baseball cards, even though they haven’t had a license with MLB and can’t use team logos. Of course, the world of baseball trading cards has changed dramatically with MLB and the Players Association entering an exclusive licensing deal with Fanatics and Fanatics buying Topps.

Panini is done in the baseball-card business. Their NFL and NBA licenses end in 2026, at which point Fanatics will take those. Maybe Fanatics will purchase Panini as it did with Topps.

Heim, on the other hand, appears to be just getting started.

Must be a teenager. Enjoy. See you Monday.