ARLINGTON — The trade deadline has passed, the Rangers are out of contention, and it’s time, once again, to start looking at 2023 more earnestly.

Position players Josh Smith, Ezequiel Duran and Leody Taveras are among those who have received looks, though out of necessity more so than trial runs for next season.

The Rangers had already announced that left-hander Cole Ragans was going to make his MLB debut. They didn’t announce until Thursday afternoon that outfielder Bubba Thompson would also be making his debut.

They did well. Ragans limited a White Sox lineup loaded with right-handed power hitters, and Thompson was part of the winning rally in the seventh inning and made a key catch in the eighth as the Rangers snapped a three-game losing streak with a 3-2 victory.

Ragans allowed one unearned run in five innings. He walked four, including one to start each of his final three innings. Chicago put the leadoff man aboard in his final four innings.

But he benefited from a couple double plays and made pitches when needed.

The only run against him came in the third, when Adolis Garcia juggled and dropped a fly ball that should have been the second out. Ragans maintained his composure and limited the damage.

“I don’t think I had my best stuff,” said Ragans, who opened the season at Double A Frisco and did well (3.32 ERA) after a promotion to Triple A Round Rock. “But I think I made it work. And, you know, I made pitches when I needed to make a pitch.”

Thompson, who was batting .303 with 13 homers and a club-record 49 steals at Round Rock, beat out a bunt in the seventh that loaded the bases ahead of a Marcus Semien sacrifice fly for a 3-1 lead. Meibrys Viloria broke a 1-1 tie with a pinch single ahead of Thompson’s first career hit.

With all Thompson can do, manager Chris Woodward is hoping Thompson can provide a spark for a team that look flat as Baltimore swept three games to open this homestand.

“Every time I lace my shoes up, I’m planning on showing all I can do, all my tools I work on,” Thompson said. “I work on them every day and I try to show them each and every day on the field, and hopefully get my team a win. Anything I can do.”

Aug. 4 is a big day in Rangers history.

In 1993, Nolan Ryan put Robin Ventura in a headlock and landed several punches to the back of his head in one of baseball’s most infamous bench-clearing brawls.

In 2010, a group led by Chuck Greenberg and Ryan outlasted Jim Crane and Mark Cuban in a courthouse auction in Fort Worth to purchase the Rangers out of bankruptcy.

That’s a big day that has the potential to get even bigger if those players become cogs on future Rangers playoff teams.

“I got so many calls and texts just how the whole organization, how proud they are of these two guys,” Woodward said.

“Their stories are pretty special,” Woodward said. “They both had to fight their way to get here.”

Another celebration in the Rangers’ 50th anniversary since coming to Arlington is ahead this weekend, and the Friday giveaway is the latest installment in the baseball card series from past decades.

Players from the 2010s are featured in the set. These are the sharpest cards in the series.

These are also the players who captured the Metroplex in 2010 and 2011 with trips to the World Series and ushered in a new group of fans.

The first card on the “pack” I received to help promote the weekend is a guy who will soon be in the Hall of Fame. The National Baseball Hall of Fame. That’s Adrian Beltre.

A little deeper into the pack I came across the best-looking card of the bunch.

Here is the Shin-Soo Choo card from the Rangers 50th anniversary set. 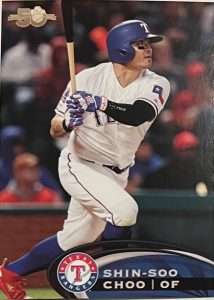 Sliding into the weekend like … . Enjoy. See you Monday.

Previous Article
Kumar Rocker isn’t going to pitch until fall instructs. Here’s the Rangers’ thinking behind the decision
Next Article
Friday on the Farm: Highly regarded Rangers prospect who hasn’t pitched since 2021 is on verge of return

Friday on the Farm: Highly regarded Rangers prospect who hasn’t pitched since 2021 is on verge of return
Jeff Wilson August 5, 2022