A 2-10 record appeared to be a lock Thursday night for the Texas Rangers after the first inning.

They were down 5-0 to the Seattle Mariners.

The Rangers had lost five straight, and a sixth was looming with that kind of deficit against a team the Rangers can’t seem to beat in a ballpark where they can’t seem to win.

Then, everything that has been missing came together over the next eight innings.

Left-hander Taylor Hearn steadied himself and provided two scoreless innings, the offense started working at-bats and chipping away at the Seattle lead, the bullpen delivered, and the Rangers didn’t buckle after losing the lead in the eighth.

The record will show that Kole Calhoun delivered the game-winning RBI in the ninth, Nathaniel Lowe drove in an insurance run and Adolis Garcia made a fabulous diving catch to keep the Mariners at bay.

But that win, the first in nearly a week, had multiple players make significant contributions.

Albert Abreu was darn near perfect in two innings of relief, Nick Solak delivered a two-run homer that vaulted the Rangers into a 6-5 lead, Eli White had his best game of the season, and a Garcia walk, of all things, jump-started a two-run ninth.

The Rangers are hardly out of the woods, and they probably weren’t throwing back the cocktails on the way to Oakland after the game.

Up next is a three-game weekend series against the A’s, whose spring-training fire sale left them ticketed for last place in the American League West. At 3-9, the Rangers are in no position to take a team lightly, but for perhaps the first season they will be considered the better team.

That win Thursday, though, might be what allows the Rangers to get moving in the right direction.

I haven’t decided if this is good news or bad news, considering the state of affairs with the Rangers’ TV situation, but it is news: The Rangers’ game tonight at Oakland will air/be streamed on Apple TV+.

What the heck does that mean? Well, according to MLB …

Apple TV+ is accessible to anyone with internet or wireless access. No cable or satellite subscriptions are required.

However, an Apple ID will be required for access to the game, but it is free.

Card of the week

Solak very clearly knew what was ahead of him after last season, which he opened with a strong April as the starting second baseman only to fall off and eventually be optioned to Triple A Round Rock.

He was going to have to compete for playing time this spring, and that was before the Rangers signed Marcus Semien.

Solak won a roster spot, albeit as a part-time player, and his home run Thursday won’t change that. But kudos to him for making the most of his opportunities.

And as a salute to that, Solak’s 2016 Bowman Draft Chrome is the Card of the Week this week. 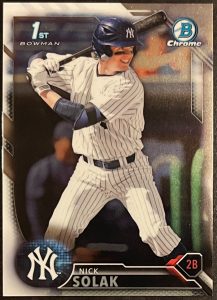 This one was purchased in May, along with a couple Garcia rookie cards as my son hopped on their bandwagon. He’ll be glad he did after learning what Solak did Thursday.

By the way, a 160-table card show is being held Saturday and Sunday at the Arlington Convention Center. Visit dallascardshow.com for information.

Don’t get pulled the wrong direction this weekend. Enjoy. See you Monday.

Friday on the Farm: These Rangers prospects are establishing themselves as big-league options
Jeff Wilson April 22, 2022