ARLINGTON — Ezequiel Duran didn’t deserve to go to Triple A Round Rock, where he was sent Thursday afternoon.

The Rangers have a new third baseman, Josh Jung, and a crowded outfield. They don’t want Duran to sit around collecting dust, so they optioned him so that he can play every day and continue developing.

It’s one of those baseball things. Young players are blessed to have a spot on the 40-man roster and to have minor-league options, but they can come back to bite them.

The Rangers recalled Josh Smith and will place Brad Miller on the 10-day injured list to get Jung on the active roster. They have an opening on the 40-man roster, so that’s simple enough.

Duran will be back in the majors at some point, though perhaps not until next season. He had never played above High A entering the season, but raked at Double A Frisco and was on the 40-man roster when the Rangers needed an infielder in June to fill in for Smith.

Duran held his own at times and also had some struggles, like any young player. He heads to the minors batting .236 with five homers and a .643 OPS in 208 at-bats. He’s versatile enough to be a super utility player who gives days off to Jung, Corey Seager, Marcus Semien and whoever ends up in left field.

Seager and Semien don’t like taking days off, but a day at DH never hurt anyone. They can get their rest that way in 2023 while Duran plays.

He can get the rest of his 2022 at-bats at Round Rock, get better in the offseason and come to spring training in position to win a job.

This demotion, while not deserved, isn’t the end of the world.

Taylor Hearn was not at Globe Life Field on the off day, but he was in the news as the Rangers’ nominee for the Roberto Clemente Award.

It’s a well-deserved honor given to one player per MLB team who does well on the field and also excels in the community.

Hearn, who is from  Royse City, is especially active with local youth. He has run baseball camps and spent part of last season during the lockout bouncing various high schools to practice with teams and take part in Q&As. Hearn also sponsored a baseball team in Ghana with a financial donation and by by providing equipment and t-shirts.

The left-hander opened the season in the starting rotation but has since transitioned to the bullpen after a short stint in the minors.

A quick check of the Rangers Today archive shows that we’ve already used Josh Jung’s first Bowman card for the Card of the Week, so we had to get creative this week rather than just shoot the layup.

Bubba Thompson, Cole Ragans and Leody Taveras? Check, check and check. An executive decision was made: Go with the leading candidate to be Rangers Player of the Year.

The Card of the Week is the 2019 Topps Update Nate Lowe yellow rookie card. 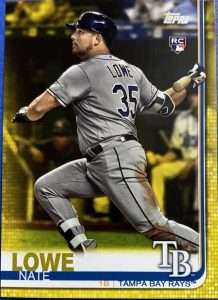 This one is not in the personal collection, but soon will be. I pulled the image from eBay.

It’s a good-looking card that the son will gladly take. Lowe has established himself as a part of the 2023 Rangers with a career-high 24 homers and a .306 average. He still has time to reach 30 homers, which would be the best season by a Rangers first baseman since Mark Teixeira.

Seager has more home runs and Adolis Garcia has more RBIs, but Lowe’s has been the team’s most consistent offensive performer. That should be enough for him to be voted as the Rangers’ best player in 2022.

How to make cornhole a little more palatable. Enjoy. See you Monday.

Previous Article
Thursday newsletter time: Rangers lose to Astros, but there was bigger news Wednesday
Next Article
Josh Jung’s MLB debut came too late for him, but is right on schedule

Josh Jung’s MLB debut came too late for him, but is right on schedule
Jeff Wilson September 9, 2022