Jon Gray had what this season amounts to an off night Wednesday, allowing six runs in five innings in his second-to-last start in his first season with the Rangers.

The offense, meanwhile, did not have an off night. For all the bellyaching about the Rangers’ record and the disappointing seasons by Marcus Semien and Corey Seager, at least relative to the expectations that come with 500 million in contract dollars, the offense has been good.

The hitters, in particular Semien, gave the Rangers a chance at T Mobile Park despite their starter’s rough outing.

But as has been the case far too often this season, the Rangers found a way to lose.

The bullpen failed to protect one-run leads in the 10th and 11th innings, with the Mariners scoring twice in the 11th without making an out en route to a 10-9 victory. Jose Leclerc and John King each blew a save.

The loss, which dropped the Rangers to 14-33 in one-run games, brought a few things to light:

The comeback is an indication that the Rangers haven’t quite gone into hibernation. They could have folded early and didn’t.

While the rotation will be the Rangers’ top priority this offseason, they need to overhaul the bullpen, too.

The Triple A regular season ended Wednesday night, and did so with a thud for Round Rock. The Express lost 10-1 as rehabbing starter Spencer Howard walked three and allowed four runs in just two-thirds of an inning.

He will not be rejoining the Rangers, who on Thursday reinstated him from the injured list and optioned him to Round Rock.

Three of the four full-season Rangers affiliates finished above. 500. Low A Down East was 65-66.

As MLB Pipeline writer Jim Callis said on the Rangers Today Baseball Podcast earlier this month, the Rangers have the best group of top-10 prospects in baseball.

Throw in Double A Frisco winning the Texas League championship, and the Rangers had a very good year on the farm.

There was yet another Condor sighting. This one came Wednesday, when former Rangers first baseman Ronald Guzman made his pitching debut.

The @Yankees first baseman records his first career punchout on the mound in his @swbrailriders pitching debut: pic.twitter.com/Z0AIIUyJLw

Guzman has some velocity, too. Why else would an organization attempt to make the transition?

He has some work to do. He walked two and struck out one in one-third of an inning in the Scranton/Wilkes-Barre season finale, but it would be a fun story if he makes it to the majors as a pitcher.

Since any opportunity to mention Guzman is worthwhile, his 2013 Bowman Chrome Prospects is the Card of the Week. 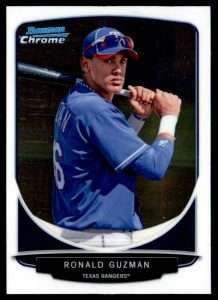 I first met Guzman in January 2014 in the Dominican Republic. He was 19 and a couple years removed from signing a $3.45 million deal with the Rangers as part of the international class that included Nomar Mazara for $4.95 million. They are elsewhere now, but still trying to find a place in he majors.

Guzman is trying it at a different position.

That’s the weekend on the other side. Enjoy. See you Monday.

Previous Article
T.R.’s Memoirs: An ode to the Rangers’ old Florida spring home in Ian’s aftermath
Next Article
Friday on the Farm: Rangers Today hands out its 2022 minor-league awards