Friday newsletter time: Five straight Rangers losses, and that one was easily the worst

A five-run lead with six outs to go and the three relievers who rate as the best of the back end of the bullpen.

The Rangers suffered through one of their worst bullpen meltdowns of the season Thursday night to open a four-game series at Fenway Park, with right-hander Jonathan Hernandez surrendering four ninth-inning runs as Boston stormed back in the final two innings to walk off the Rangers, 9-8.

The loss was the Rangers’ fifth straight, but this one rates as a soul crusher after the Rangers led 8-3 in the eighth. Rangers interim manager Tony Beasley turned the game over to Matt Moore, who allowed two runs and recorded only one out. Jose Leclerc was wild, but got the Rangers to the ninth with an 8-5 lead.

Hernandez walked the first two batters of the ninth before allowing a single that loaded the bases. Rafael Devers doubled in two, and after J.D. Martinez struck out and Christian Arroyo was intentionally walked, Enrique Hernandez tied it with a single to right and Rob Refsnyder won it with a single to left.

It happened fairly quickly, all with the Rangers working with a short bullpen. Beasley left it up to his Hernandez, which is hardly an unusual move for a manager with his closer. Hernandez was just flat out bad.

The collapse spoiled one of the best all-around performances of the season by the offense. The Rangers scored in a number of ways, from manufacturing runs to Adolis Garcia hitting the ball over the Green Monster.

Marcus Semien and Nate Lowe reached base four times. The top three batters of Semien, Corey Seager and Lowe went 7 for 14. Bubba Thompson reached three times from the bottom of the lineup.

Yet, it wasn’t enough.

Right-hander Josh Sborz (elbow) was placed on the 60-day injured list Thursday to make room for right-hander Jesus Tinoco, one of two call-ups from Triple A Round Rock. Nick Solak was the other.

Sborz became the third player on the 60-day IL who will have to be added back to the 40-man roster this offseason, though Eli White (wrist) might make it back this season. The Rangers also have a pile of minor-leaguers who are eligible for the Rule 5 draft (Josh Jung, Cole Winn, Owen White, Luisangel Acuna and Zak Kent to name a few).

The Rangers will have to do some serious roster cleaning.

Moore, Martin Perez, Charlie Culberson, Kole Calhoun, Kohei Arihara and Dallas Keuchel can be free agents after the season, so there are six spots. A few others can be opened fairly painlessly via designating players for assignment. A trade is another way to open a 40-man spot.

That might be enough, but the Rangers will have to weigh whether they want to risk losing a 40-man player on a waiver claim or if they would rather risk losing an eligible prospect in the Rule 5 draft.

The Rangers can/should/plan to/I don’t know anymore/maybe add Jung to the 40-man before the season ends. The 40-man roster must be set in the offseason by Nov. 18.

The card scored a 9.5 rating from SGC, which means the card is a gem mint. The only possible score higher is a 10. PSA is considered the best card grader, so it would be interesting to see what the Mantle would score under PSA’s watchful eye.

But for our purposes, the most expensive card ever sold has to be the Card of the Week. Take a look at it for yourself. 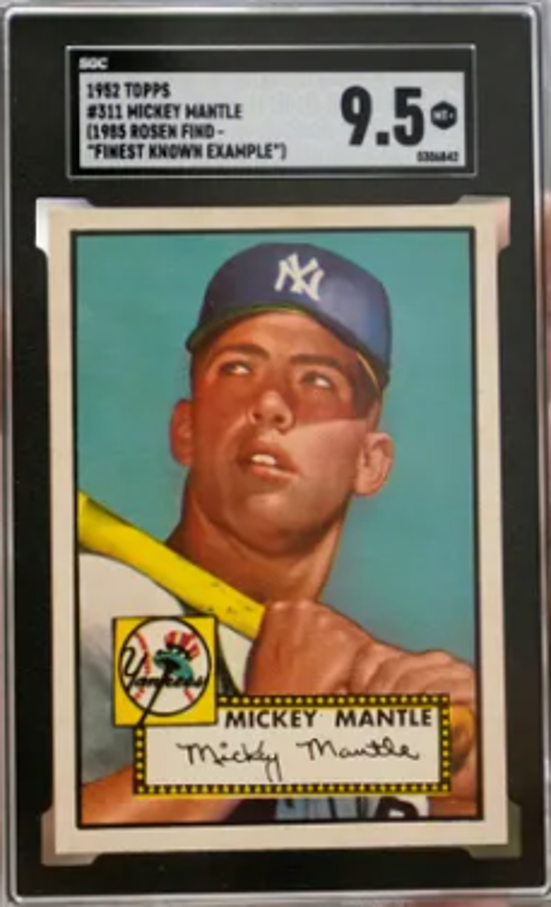 It looks pretty nice to me.

More of you guys are going to have to become paid subscribers for me to try to win that one the next time it’s up for auction. A lot more of you guys.

This guy will be forever grateful. Enjoy. See you Monday.

Previous Article
Thursday newsletter time: Rangers drop fourth straight, this time with their stopper on the mound
Next Article
Friday on the Farm: Aaron Zavala making late push to be Rangers’ top minor-leaguer in 2022