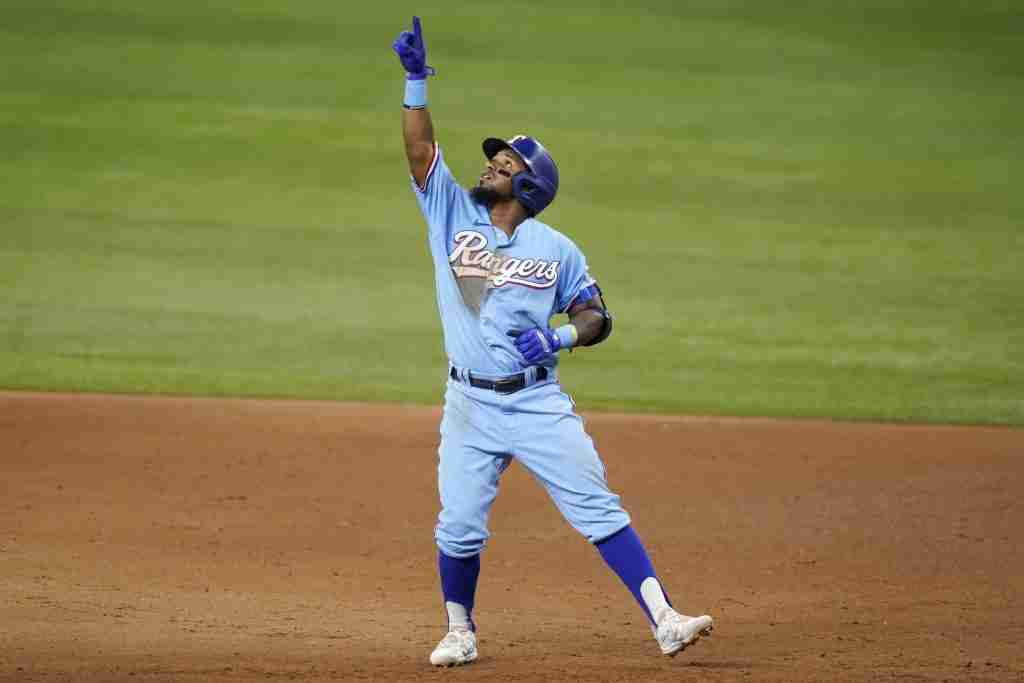 The Rangers cleared on a spot on the 40-man roster by trading Yonny Hernandez to Arizona for a minor-league outfielder (The Associated Press/Tony Gutierrez).

TORONTO — MLB needed to see final rosters Thursday from all 30 teams, not just the ones who opened the season, and the Texas Rangers got theirs in before the deadline and some 30 hours before their 2022 season opener.

A few mysteries were solved.

The Rangers created spots on the 40-man roster for infielder Charlie Culberson and right-handers Matt Bush and Greg Holland by:

The Rangers did not put outfielder Joe McCarthy on the 40-man roster and assigned him to Triple A Round Rock. A team in Japan is interested in signing McCarthy, which could lead to a nice payday, so the Rangers are still working through the situation.

McCarthy could be the first man up when a position player hits the injured list. Remember: It took less than two weeks last season before the Rangers had to summon Adolis Garcia for Ronald Guzman.

Spencer Patton was optioned to Round Rock, and fellow righty reliever Garrett Richards was placed on the 10-day injured list (blister).

Here’s the Opening Day roster, for those who missed it Tuesday:

Give a gift subscription

The Rangers kick off their 50th year of home games in Arlington on Monday with the 2022 home opener against Colorado and have revealed the lineup of pregame highlights.

First pitch: Duties this year go to Orion Jean, a sixth-grader from Mansfield who was chosen as the 2021 Kid of the Year by Time Magazine thanks to his work in the community. Work, you say? In two years he has collected and distributed 100,000 meals, a half-million books and thousands of toys for children affected by COVID-19. Orion will be throwing to Ivan Rodriguez.

Texas Toss: The Rangers will honor former Arlington Mayor Tom Vandergriff, who brought major-league baseball to North Texas, by having his son Victor and grandson Parker participate in the toss. Vandergriff passed away in 2010. Rangers Hall of Famer Tom Grieve, who is retiring after this season (his 55th in baseball), will catch the toss. Joel LaGrone will sing Texas, Our Texas before the toss.

National Anthem: In keeping with the Vandergriff theme, his daughter, Vanessa Watters, will perform the National Anthem, as he did 50 years ago for the first Rangers home game. She is a professional singer and actress, and will be accompanied by her sister, Vivian Vandergriff, and niece Katherine Parker.

Get tickets at texasrangers.com/tickets, by calling 972-RANGERS or by visiting the Globe Life Field box office at the southeast corner of the ballpark.

Card of the week

Rangers left-hander Brock Burke graduated from Evergreen High School in the great state of Colorado, and in 2019 joined former Rangers one-week great Kevin Kouzmanoff as the only MLB players to come from Evergreen.

Burke graduated high school in 2014, some 47 years after the last of the four Fleming children graduated from Evergreen. The last was Joanna Fleming, now Joanna Wilson.

So, in honor of the Cougars and Burke making his first Opening Day roster and my family, the Card of the Week this week is Burke’s 2019 Bowman Chrome.

Previous Article
Texas Rangers will be better in 2022 after offseason spending spree, but how much better?
Next Article
Friday on the Farm: Josh Jung faces mental grind in Arizona while his Texas Rangers teammates go play