The Rangers wished Willie Calhoun well Thursday afternoon after shipping him and some cash to San Francisco for fellow outfielder Steven Duggar.

As far as I can tell, nobody who has come across Calhoun would wish otherwise.

He’s a good guy who has worked hard to try to improve, including overhauling his body in an attempt to be more athletic. Calhoun has had some miserable injury luck, including the broken jaw after getting hit by a 95 mph fastball at spring training in 2020.

He hasn’t been able to match the hitter he was before the injury.

Of course, the injury woes and his tendency to pout when things didn’t go his way, including May 1 when he was demoted to Triple A Round Rock with a .136 average, are a big part of his legacy as the failed centerpiece of the Yu Darvish trade in 2017.

He came to the Rangers’ as the Dodgers’ No. 4 prospect, which might have led to a sense of entitlement that led to unsavory reactions after not making the Opening Day roster in 2018 and 2019 and upon his demotion. He leaves as a -1.6 bWAR player who just went unclaimed through waivers and might be viewed as a disgruntled employee who very publicly made it known he had requested a trade.

A fresh start, as the Rangers called it, is exactly what Calhoun needs.

The Giants did not add him to the 40-man roster. He will go from Triple A Round Rock to Triple A Sacramento and is viewed as a depth piece for the Giants, who are a playoff contender in the National League.

Calhoun was a .217 hitter at Round Rock with five homers in 91 at-bats, so he has some work to do.

Here’s hoping he finds what is missing.

If you’re looking for something to do or have been biding your time to attend a Rangers game, Friday and Saturday would be a good time to get in gear.

The Rangers, as part of their 50th anniversary since coming to Arlington, are celebrating the 1980s teams. Many of the decade’s best player will be at Globe Life Field, where it’s always 72 degrees inside when the roof is closed.

Here are some of the highlights:

See you this weekend.

We’re back on our game this week, again dipping back into the Texas Rangers Baseball Podcast bucket to find the rookie card of the upcoming player guest.

Double A Frisco shortstop Jonathan Ornelas joined the program Thursday from Little Rock. Good guy, and he enters today batting .336 in what is not a small sample size.

I did not have the Card of the Week in my collection, but I should by late next week after purchasing his 2019 Bowman Draft Chrome first Bowman auto. 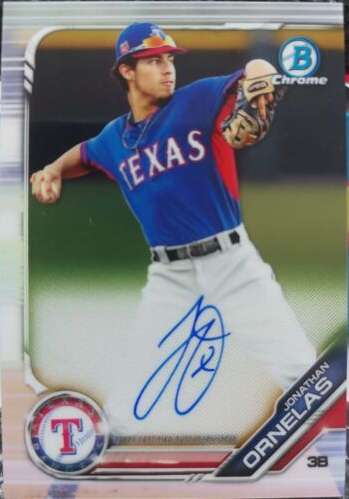 Note that it has him listed as a third baseman, even though he’s a natural shortstop. He can play third, as well as second base and center field, but he feels best up the middle.

He’s a terrific defensive player, which will help him get to the major leagues. So will a .336 average.

Find the sweet spot this weekend. Enjoy. See you Monday

Previous Article
Willie Calhoun gets his wish as Rangers trade him to Giants for Steven Duggar
Next Article
Friday on the Farm: A Rangers feel-good story a year ago, Cole Ragans is on cusp of major leagues

Friday on the Farm: A Rangers feel-good story a year ago, Cole Ragans is on cusp of major leagues
Jeff Wilson June 24, 2022