John Blake didn’t want to be recognized for his contributions to the Rangers over parts of five decades.

But he didn’t have much of a choice. Owners Ray Davis and Neil Leibman told him he was going into the Rangers Hall of Fame this year.

His day in the spotlight comes Saturday, when he and second baseman Ian Kinsler will be inducted during an on-field ceremony before the Rangers face the Mariners at Globe Life Field. Kinsler and Blake will be the 25th and 26th members of the Rangers’ Hall.

Among the 12 Hall of Famers who will be on hand are Jim Sundberg, Ferguson Jenkins, Tom Grieve, Ivan Rodriguez, Michael Young and Adrian Beltre. Frank Catalanotto, Chris Davis, Craig Gentry, Colby Lewis, Doug Melvin, David Murphy and Young, all of them former teammates of Kinsler, will also participate.

The Hall of Fame weekend kicks off today with the Hall of Fame luncheon. Each game this weekend will feature a giveaway for the first 15,000 fans, with the headliner being a Young bobblehead given away Saturday.

Kinsler was the spark plug of the two World Series teams in 2010 and 2011. He is one of only two second baseman in MLB history with multiple 30-30 seasons, and he is the franchise leader in leadoff home runs.

Blake also deserves to be honored as the media-relations face of the franchise during some of its finest and most difficult moments. He has stepped back from day-to-day duties, with his focus shifting to alumni relations.

A point that likely didn’t need to be driven home to Cole Ragans was nonetheless Thursday afternoon.

Major-league hitters, even bad ones, can hit a fastballs that catch too much of the plate.

Martin Maldonado, who is hitting .187, swatted a three-run homer, and Alex Bregman, a terrific player in the midst of a down year, connected for two-run shot off Ragans as the Astros beat Ragans and the Rangers 7-3.

Those were the five runs against Ragans over 4 1/3 innings in his second career start. He walked three and struck out only one as the Astros’ loaded lineup made him labor for 88 pitches.

Ragans told reporters at Minute Maid Park that he fell behind too many hitters and wasn’t able to beat them with fastballs as he tried to get back in the count. The Astros are one of the best teams in baseball at laying off pitches out of the strike zone.

Walks weren’t an issue for Ragans this season in the minors, with only 31 in 94 2/3 innings, but he has issued seven in his first 9 1/3 innings in the majors. His first two starts, though, have been against the White Sox, who crush lefties, and the Astros, who crush everybody.

It’s Hall of Fame weekend, so it seems only befitting that the Card of the Week should feature one of the inductees.

If Blake has a card, I don’t have it.

I do have a Kinsler card, though, and his 2012 Topps Great Moments relic is the Card of the Week. 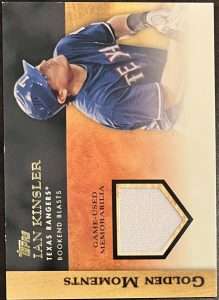 It’s a pretty cool moment, one that I had forgotten until finding this card. Topps called it Bookend Blasts.

On July 19, 2009, Kinsler opened the game with a leadoff homer and finished it with a walk-off homer in the 12th, becoming only the third player in MLB history to pull off that feat.

Kinsler also had a 6-for-6 cycle game that season, on Jackie Robinson Day. That one is hard to forget.

Flaunt it if you’ve got it. Enjoy. See you Monday.

Check out my butt pic.twitter.com/lbWoXjbxRZ

Previous Article
T.R.’s Memoirs: Reviewing Rangers Hall of Famers, and non-members who are a good match
Next Article
Friday on the Farm: A healthy shoulder and recharged mind have Kyle Cody aiming higher