Friday newsletter time: June wasn’t Rangers’ best, but it was far from their worst

The month of June came to a close Thursday, but for the Rangers it ended Wednesday.

They played their final June game at Kansas City, losing, 2-1 and were off Thursday on the final day of the month.

The loss dropped their record for the month to 12-14, which led to the mlb.com headline “June swoon for Rangers.” Don’t blame Kennedi Landry. She just writes the stories, and, indeed, the Rangers dipped last month after a 17-10 May.

May was their first winning month since June 2019.

The headline, though, is a little strong.

“Swoon” makes it sound like the Rangers went 2-24. The Rangers, for the most part, were competitive. They struggled in one-run games and saw a couple games slip away late.

There were some disappointing series, like the four-gamer at Detroit and the three-game home series last weekend against Washington.

However, rookies Josh Smith and Ezequiel Duran created some excitement. Adolis Garcia, Nate Lowe and Marcus Semien each hit seven home runs. One of Garcia’s was a walk-off shot Saturday to beat the Nationals, and three of Semien’s came on the same day.

Jon Gray had a nice month, with the fourth-most strikeouts in the league and a sub-3.00 ERA.

Could June have been better? Will a sub-.500 monthly record the next few seasons potentially cost the Rangers a shot at the postseason?

Yes and yes, in theory.

Considering where this team was last season, when it won only 60 games in six months, June doesn’t look all that bad.

The Rangers will open a three-game series tonight against the Mets, playing them for the first time since 2017.

That series was also at Citi Field, and I have no recollection of it, though I believe that I flew home after the finale through Charlotte.

I thought the last time the Rangers had played at Citi Field was in 2014, and I said it on the Mets Musings podcast with Gary Mack.

It was a memorable series, though not necessarily because of anything that happened on the field.

The Rangers had been in Baltimore the night before, when, like everything else that season, nothing went right.

The game was delayed by rain, but it never rained. The Rangers didn’t want to lose a Yu Darvish start, so they bumped him to the opener vs. the Mets, on July 4, and let him try to get to New York on his own to avoid potential travel delays from Baltimore.

So, Darvish hopped on a train. The problem, though, is that the train had a lengthy delay en route to New York. The Rangers played their game, hopped on a flight, and easily beat Darvish to New York.

(My flight to New York the next morning was canceled, so I rented a car, drove to Washington and caught the Shuttle.)

He pitched the next night, despite a lack of sleep, and the Rangers lost. Darvish didn’t pitch well in a no-decision.

The Mets have the most wins in the National League (47) and lead Atlanta in the NL East by 3 1/2 games. They are hanging on without starters Max Scherzer and Jacob DeGrom, who are rehabbing from injuries and nearing their return.

I found this one recently looking for another Card of the Week and thought this might make a good one some day.

Today is that day.

The Card of the Week is the 1993 Upper Deck Strike Force, featuring three Hall of Famers and Steve Avery. 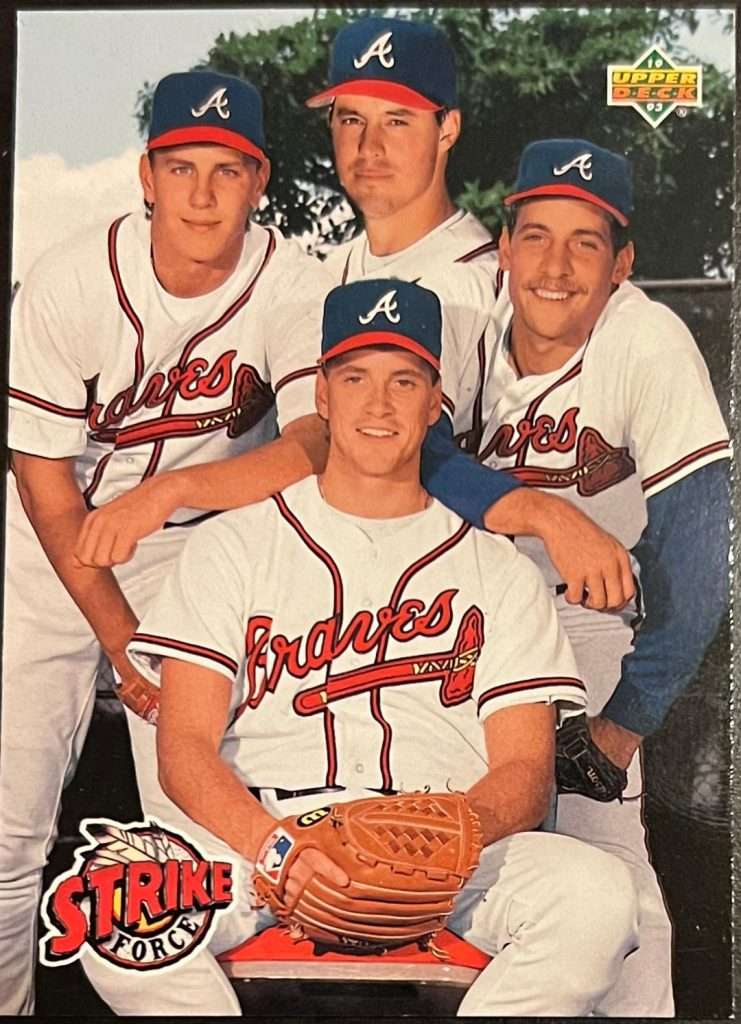 It’s not so much that the card features Greg Maddux, Tom Glavine and John Smoltz, which is pretty cool. The card has some problems, all of them related to Maddux.

As the back of the card says, Maddux was acquired in the offseason before the 1993 season. Fine. The quartet could have posed for this card in spring training.

But Maddux looks as if he has been photoshopped into the picture. He looks bigger than the other three, and he’s the only one not smiling. The hat really looks photoshopped.

And, yes, photoshopping existed in 1993 but was in its relative infancy.

I suppose I could call him or see if his brother knows anything about this. But it’s late, I had a couple beers at dinner, and I know Mike Maddux is a subscriber, so maybe he’ll pass along what he knows.

I’ll have my tinfoil hat ready.

Coming in hot, and going out hot. Enjoy. See you Monday.