Rangers Today has pretty much made itself clear on what the Rangers should do with left-hander Martin Perez.

He allowed three runs in six innings Thursday afternoon, keeping the Rangers within striking distance for a 5-3 comeback win after he yielded three runs in the third inning.

For those scoring at home, like his agent, Perez now has 21 quality starts.

But enough about Perez, whom the Rangers would be foolish to let walk in free agency this offseason.

Corey Seager smacked a two-run homer in the eighth inning, his 32nd homer of the season, and Jose Leclerc struck out Mike Trout as the potential tying run to end the game as the Rangers clinched the season series against the Angels. The teams will play a three-game series next week at Anaheim.

The other three runs came courtesy of Marcus Semien, Nate Lowe and Adolis Garcia — the first, third and fourth hitters in the lineup. With Seager batting second, the first four hitters went 5 for 15.

It’s difficult to say Seager has had a bad season. He has a career-high in home runs. His .781 OPS is above league average, though well below his career average (.854). Oh, and he was an All-Star, so his peers think highly of him.

Together, Seager and Semien have combined for 114 extra-base hits.

But you know what would make them happier? If the Rangers re-sign Perez.

If you’ve been watching the games, listening to them or have a subscription to Rangers Today (subscribe here for $5.99 a month if you don’t), you know that this weekend at Globe Life Field is Tom Grieve’s weekend.

Mr. Ranger is retiring after 56 seasons in baseball, 55 of them with the Rangers.

He will be on hand tonight to help award $100,000 grants to five North Texas nonprofit organizations through the Texas Rangers Baseball Foundation’s Legacy Grant program. Sunday, though, is the big day.

The first 10,000 fans will receive a Grieve bobblehead doll; a $10,000 donation to University Little League of Fort Worth will be made in Grieve’s name; and the city of Arlington will declare Sunday at Tom Grieve Day.

For good measure, he will throw out the ceremonial first pitch while accompanied by many of his grandchildren.

T.R. Sullivan has recapped Grieve’s career this week over two parts of the latest T.R.’s Memoirs. Grieve was a player, ticket salesman, farm director, general manager and broadcaster for the Rangers/Washington Senators over parts of seven decades.

It’s Mr. Ranger’s weekend, so it’s only fitting that Grieve be featured in the Card of the Week.

There are several good candidates out there. The 1972 Topps card would have been especially fitting considering the whole 50 years in Texas thing. Alas, that one is not in my collection.

But Grieve’s 1973 Topps is (though on this one. I’m not writing from home). It’s clean. It might not be as fun as the 1975 Topps, with the colorful borders and Grieve sporting some long-ish locks, but I think it fits Grieve the best. 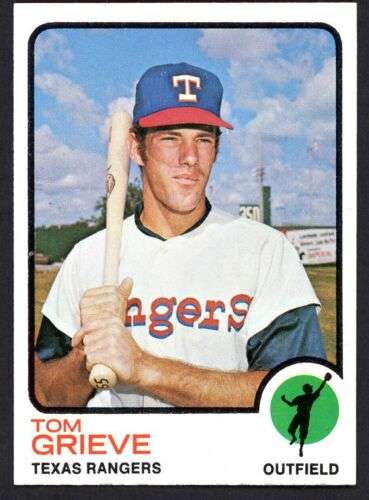 Here’s wishing Tom the best in retirement, though I suspect we’ll still occasionally be graced by his presence at the ballpark.

Come on! Throw a dog a cone! Enjoy. See you Monday.

You’re killing me over here…😂🦮🍦👅 pic.twitter.com/PGeE6ur3ZD

Previous Article
T.R.’s Memoirs: Tom Grieve’s run as Rangers GM didn’t change the person he is (Part II)
Next Article
Friday on the Farm: The importance of playoff baseball in the Rangers’ system

Friday on the Farm: The importance of playoff baseball in the Rangers’ system
Jeff Wilson September 23, 2022