Only two pitchers in Rangers history have made seven straight starts of at least six innings with no more than one run allowed.

One of them is in the National Baseball Hall of Fame. That would be Gaylord Perry.

The other is Martin Perez, who continued his career-best stretch Thursday with seven innings of one-run ball.

The problem? The game was tied when he left as A’s right-hander Frankie Montas matched Perez and might have been better with 12 strikeouts.

But Perez gave the Rangers a chance to break through, as did Matt Bush with a scoreless eighth, and they did..

The Rangers scored three times in the ninth, highlighted by a two-run homer by Nate Lowe, en route to a 4-1 victory.

“This place is a tough place to score runs,” manager Chris Woodward said. “I’m just glad we were able to get it done.”

Adolis Garcia broke the 1-1 tie with an RBI double, scoring pinch runner Eli White, and Lowe’s third homer of the season came off funky left-hander Sam Moll. It was about as unexpected as home run as Perez’s 1.60 ERA through nine starts.

The Rangers have won two straight and have three more games remaining at the sparsely populated Oakland Coliseum. Jon Gray is scheduled to start Friday, and the Rangers need two wins to finish their 10-game road trip at .500.

It’s important to keep in mind that the Rangers continue to play well overall. Yes, they have faults and bad innings, as they did Tuesday at Anaheim, but they are 18-14 since opening the season 2-9 and 13-9 in May.

That player is third baseman Andy Ibanez, who actually drove in the Rangers’ first run with a bases-load walk. Shame on Montas.

Ibanez has continued to play because his defense has been solid, which comes as a surprise. His .175 average is the wrong kind of surprise.

The issues at third base, where Charlie Culberson and Brad Miller have also played this season, were a topic of discussion Tuesday in Anaheim with manager Chris Woodward. There’s not a lot the Rangers can do there.

However, they could send Ibanez to Triple A Round Rock and promote Leody Taveras. Frankly, it’s probably what Ibanez needs.

Matt Carpenter could have been an option, but he asked for his release last week after being told there was no path to the Rangers’ roster. On Thursday, he signed with the Yankees.

Carpenter can play third base, though he’s mostly been a first baseman of late and was almost exclusively a first baseman/DH at Round Rock. He is older, at 35, and his past couple seasons were not good at the plate.

But Carpenter, a left-handed hitter, was crushing right-handed pitchers at Round Rock to the tune of a 1.180 OPS. Ibanez, a righty hitter, has a .471 OPS against righties.

It’s not like Ibanez just fell into his current slump. He was in throes of it last week when Carpenter left the organization.

He could have helped. The best team in baseball thinks he can help them.

At this point, MLB and players association might as well just agree to have 14 pitches on active rosters the whole season.

The two sides agreed to extend the 14-pitcher limit through June 19. Teams opened the season with two extra roster spots that could go to pitchers in an effort to help pitchers get built up after a shortened spring. The sides then agreed in April to reduce roster to the standard 26, but to allow 14 pitches though Monday.

The latest decision delays some inevitable difficult decisions facing teams, including the Rangers, on who to send to the minor leagues to get down to 13. The Rangers could still be faced with a difficult decision if Jose Leclerc comes off the injured list before June 19. Jonathan Hernandez isn’t far behind.

The bullpen has been more dependable, especially in winning situations, the past few weeks when at full strength.

The pursuit of rookie cards of Texas Rangers Baseball Podcast guests continued last week, and I came home from Anaheim to a few new ones in the mail.

We had Josh Smith on in January (and posted the video on our YouTube channel) after the Rangers hosted a minor-league leadership summit at Globe Life Field. It was before he went to spring training and dazzled Rangers coaches with his performance at the plate and in the field.

He cooled off to start the season at Round Rock but has turned it on while playing shortstop, third base and center field. Smith has emerged as a front-runner to potentially make his MLB debut this season.

The Rangers got him last summer in the Joey Gallo trade. Hence, his 2019 Bowman Draft Chrome 1st Bowman — the Card of the Week — is of him in a Yankees uniform and with his hair short and his face stubble-free. 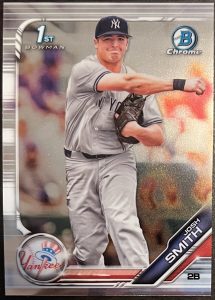 Things are not always what they seem..🐕🐾😅 pic.twitter.com/TyK2Y8draR