This wasn’t a press release, so some of you probably have the same email from the Rangers.

Barring something unforeseen, I will again have my Baseball Writers Association of America card for next season, so I won’t be in the market for a full- or half-season plan. But I did wonder what I’d do if I weren’t a Rangers beat writer.

Why would I buy season tickets for a team that, barring a 19-0 finish, will end with a sixth straight losing season?

Well, I like baseball, a lot. That’s a one reason.

Having seen almost every Rangers game the past two seasons, progress has been made in 2022. The Rangers will enter the offseason with seven of the nine spots in the lineup settled for 2023. Left field is open, but as a baseball fan and with the potential of the new rules, I’d like to see Bubba Thompson get a shot.

The Rangers can keep the DH spot open and rotate through their best players. Maybe they keep three catchers and sprinkle DH and first-base at-bats between Nate Lowe and Mitch Garver and Sam Huff.

The most pressing pitching need? A closer. If the Rangers sign a closer, I’d be more interested in season tickets.

Martin Perez? Bringing him back would nudge me a little further.

Carlos Rodon? Two great seasons, but he’s reaching his career-high in innings only this season. That injury history is pretty scary. Is it as scary as Jacob DeGrom’s? Tough call, both on that and if they would be the right free agents for Ray Davis to sign.

A trade might be the best route for a starter, and the Rangers have the prospects to get just about any pitcher.

Davis and general manager Chris Young have said unequivocally that the Rangers will contend in 2023. The lineup is in place. The pitching staff needs help. Improvement defensively must come from within.

If you’re buying the pitch from the owner and GM, 2023 has a chance to be more entertaining.

If the Rangers were to throw in a subscription to Rangers Today, that might do it. Tell your ticket rep I’m willing to make a deal.

The Rangers don’t expect to bump anyone else in the minor leagues the rest of the season. It’s possible a few players at Double A Frisco could finish at Triple A Round Rock, but that depends on if Frisco makes a quick exit from the postseason berth they should soon be clinching.

Players at Round Rock could also make their way to the big leagues. One name to watch is Kyle Cody.

Cody, who is returning from shoulder surgery a year ago, is also eligible for the Rule 5 draft. With his transition to the bullpen going smoothly and with his stuff back to where it was before the injury, Cody is a candidate to be added to the 40-man roster in November.

If the Rangers believe he will be a roster add, and if they need innings the rest of the way, Cody could provide them.

The Rangers were off Thursday, which was recognized as Roberto Clemente Day across the major leagues. Tampa Bay, the Rangers’ opponent the next three games, became the first team in MLB history to post a lineup in which all nine players were of Latin decent in a game at Toronto.

Clemente is a member of the National Baseball Hall of Fame. He was a terrific hitter and strong-armed outfielder, but also an amazing humanitarian. He was killed Dec. 31, 1972, in a plane crash in his native Puerto Rico while flying to provide aid to those affected by a massive earthquake in Nicaragua.

The Topps Company had already started production of its 1973 set, and card No. 50 was of Clemente. It would have been his 19th MLB season.

To recognize Roberto Clemente Day, the Card of the Week is that 1973 Topps card. 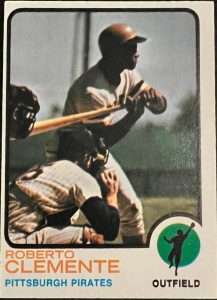 This one comes straight from the Wilson collection. I’m badly in need of his 1962 card as I ever so slowly attempt to finish that set. A 1955 Clemente rookie card that is graded as a PSA 9 is up for auction and is expected to surpass $1 million. As of Thursday night, the top bid was $420,000 with a week to go.

Previous Article
Thursday newsletter time: Another one-run loss in typical fashion for these Rangers
Next Article
One week down. How does Rangers’ Josh Jung feels about his first taste of the majors?

One week down. How does Rangers’ Josh Jung feels about his first taste of the majors?
Jeff Wilson September 16, 2022