The Rangers are in the midst of cleaning up their 40-man roster, which happens every year around this time and it’s not particularly pleasant.

Many of the decisions are difficult, and it’s no fun trying to decide if the organization would be OK if Player A were to be lost on a waiver claim or take his free agency, if eligible to do so. Trading players for prospects or cash considerations is another avenue for clearing roster spots.

But it’s almost always more than Player A, especially when a team has several players on the 60-day injured list who must be reinstated and multiple prospects who need protection from the Rule 5 draft.

The Rangers found themselves in that situation.

On Thursday, they lost third baseman Andy Ibanez on a waiver claim by the Tigers and lost right-hander Tyson Miller on a claim by the Brewers. Catcher Meibrys Viloria and righty Drew Strotman, who never pitched for the Rangers, were claimed by the Giants. The Rangers traded utility man Nick Solak to the Reds for cash.

Reliever Jesus Tinoco, who surrendered Aaron Judge’s 62nd homer, cleared waivers and was outrighted to Triple A Round Rock.

Ibanez is blocked by Josh Jung at third base and at just about every other position he can play. The same goes for Solak, whose move to the outfield hasn’t been smooth and whose bat has lost its punch. Miller is a pitcher who is good to have around, but isn’t going to pitch in the big-league rotation and might not have a spot at Triple A.

The decision to designate Viloria for assignment comes as a mild surprise. He’s a young, lefty-hitting catcher with power, and those guys don’t grow on trees.

There are now six open spots on the 40-man, and the Rangers could use them all on Rule 5-eligibles. Shortstop Luisangel Acuna, outfielder Dustin Harris and righties Owen White and Cole Winn are easy adds. There are many others who have a case to be protected from the Rule 5.

It’s that time of year. It’s not a particularly pleasant part of being in charge of an MLB roster.

Left-hander Martin Perez received a qualfying offer Thursday from the Rangers, one of 14 free agents who were extended the one-year, $19.65 deal.

Among the other 13 are players who are of interest to the Rangers, including left-hander Carlos Rodon and righties Jacob deGrom and Nathan Eovaldi. If the Rangers want to dip their toes into the Aaron Judge sweepstakes, he was offered, too.

The Rangers did that last offseason after signing Corey Seager and Marcus Semien. They used their first two picks, in the first and fourth rounds, on righties Kumar Rocker and Brock Porter, arguably the top two pitchers in the draft.

It likely wont work out like that in the 2023 draft, but the Rangers wouldn’t do it if they didn’t have a deep system. Also, they would be unlikely to find players who are better than the potential free-agent signees.

The object of many Rangers fans’ free-agent desires is deGrom.

A triple-digit heater and a nasty slider make him the best pitcher in the game … when he’s healthy. And he hasn’t been healthy the past two seasons, making only 26 starts. The 34-year-old opted into free agency with the hopes of making around $40 million a season.

Whether the Rangers are one of the teams to make that offer is TBD. There are concerns about deGrom’s health, and those concerns are warranted.

But it’s not my money or your money. It’s Ray Davis’ money, so go ahead and spend it for him.

As free agency kicks off, the Card of the Week is deGrom’s 2014 Bowman, part of a star-studded set loaded with First Bowman cards. 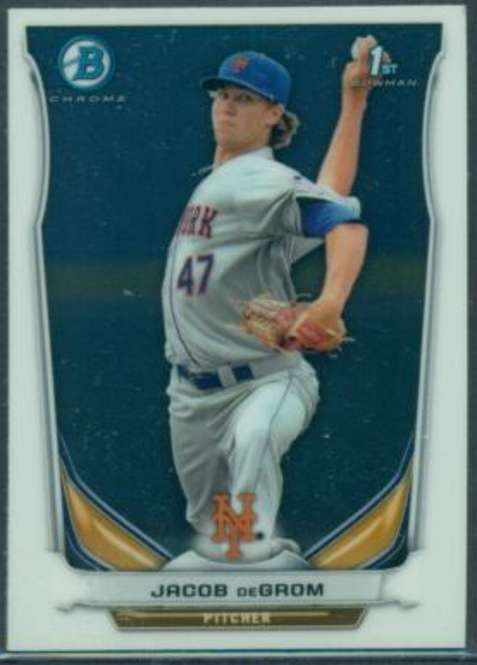 An A for effort. An A+ for this dogger’s patience. Enjoy.