Friday newsletter time: Rangers have five chances to win a Silver Slugger. Here’s who has the best shot

The Rangers finished with the fourth most runs in the American League and the fifth most homers.

They had four players with at least 26 home runs.

Neither World Series team had that many.

So, it shouldn’t come as a surprise that the Rangers have four finalists for the Silver Slugger award — shortstop Corey Seager, first baseman Nate Lowe, outfielder Adolis Garcia and second baseman Marcus Semien. Garcia is also a finalist at designated hitter.

Will the Rangers have five winners? Well, no. Will they have one? Maybe.

The best bet might be Lowe, who posted the best OPS (.850) among the finalists at first base. His 27 homers trailed Vladimir Guerrero Jr. and Anthony Rizzo by five. Corey Seager led all shortstops with 33 homers.

Winners will be announced Nov. 10.

Jonah Heim probably should have been a finalist. He hit 16 homers, which is one more than finalist Martin Maldonado. Maldonado hit .186, by the way. Louisville Slugger, who sponsors the award, might want to review that selection process.

Those five Rangers players are part of an offense that doesn’t need much work in the offseason. The Rangers want to add a power bat, but are expecting/hoping to get full seasons from third baseman Josh Jung and catcher/DH Mitch Garver.

The lineup must be better against elite pitching, which is the next step the offense must take, but the Rangers aren’t in bad shape at the plate.

The World Series begins tonight, with the Astros playing host to the Phillies.

Rangers fans know how good the Astros are, having seen them 19 times this season. Houston went 14-5 against the Rangers, who went 4-0 agains the Phillies.

Philadelphia, meanwhile, has been pretty good, too. Bryce Harper has been a superstar in the postseason. The Phillies’ rotation, though, isn’t as good, and they have ridden their bullpen hard.

The playing field should be pretty even, though, with both clubs having mulitple days off after winning their championship series.

Houston is just better. Give me the Astros in five games.

We’ve done one of these before, one of the “prospect” cards from the 1970s. This one, though, includes new Rangers manager Bruce Bochy.

The Card of the Week is his 1979 Topps rookie No. 719, which also features Astros prospects Mike Fischlin and Don Pisker. 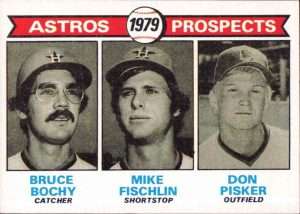 None of the three had stellar careers. Bochy’s 2.3 career WAR is the best of the three. Fischlin checks in at -1.4. Pisker never played in the major leagues.

Bochy, a backup catcher, made his mark as a manager, obviously, and with that sweet stache. Fischlin’s claim to fame is that he was one of Scott Boras’ first clients (he and Boras were high school teammates) and works for the Boras Corp. Pisker was a highly regarded prospect for a time, but his biggest claim to fame might be that he’s on Bochy’s rookie card.

Bochy will be the guest on the next episode of the Rangers Today Baseball Podcast, which should drop later today or Saturday.

Do something this weekend that makes you this happy. Enjoy. See you Monday.

Previous Article
Thursday newsletter time: Rangers job to delay Bruce Bochy going into Hall of Fame, and he’s fine with it
Next Article
Friday on the Farm: Tracing the steps Rangers system has taken in two years