Friday newsletter time: Rangers head across the country with a needed victory in Miami

MIAMI — If you’re going to embark on a five-hour, 2,500-mile flight, you might as make it a happy flight.

The Rangers did that Thursday afternoon by beating the Marlins 8-0 in the first of 11 games over four cities coming out of the All-Star break.

Jon Gray allowed four hits and struck out five in six innings, running his scoreless-innings streak to 14 2/3, and Adolis Garcia launched a two-run homer for his first distance clout of the month.

Garcia went 2 for 5 and also drove in a run in the Rangers’ three-run third that featured four singles and a hit batsman.

The victory snapped a four-game losing streak, compliments of being swept at home by Seattle to end, and gives the Rangers some good vibes entering a three-game series Friday at Oakland.

“It makes it a little easier,” manager Chris Woodward said. “It is nice to get on that plane. A good start to the road trip, for sure.”

Woodward said that the key for the second half isn’t rocket science: find a way to win close games and get better starting pitching.

Sounds simple enough, but the Rangers are 5-20 in one-run games and three of the rotation spots remain open. Dane Dunning is expected to return Tuesday, which will help stabilize things, but Spencer Howard and Glenn Otto must pitch well to stick in the rotation.

“We’re in every game,” Woodward said. “The big part of our team is our starting pitching. If 3, 4 and 5 can solidify themselves a little more, it allows the bullpen to be fresh and in turn takes a little heat off our offense.”

The offense is trending the right way, but needs to see Garcia and Kole Calhoun become productive again.

Garcia entered Thursday in a 7-for-56 slump this month after being a unanimous choice for Rangers Player of the Month for June. Calhoun was also 7 for 56 and hitless in 18 at-bats before a double in the sixth.

More on the suit

Martin Perez wore the best suit of any All-Star on Tuesday for the All-Star parade in Los Angeles.

The suit, selected by his fiance, was black with a large rose pattern.

He liked the suit, too, though he modeled it for some confidants to make sure they approved before pulling the trigger.

For those in the market for a suit like that, Perez said it’s from Dolce & Gabbana.

He also had adidas customize a pair of cleats for the All-Star Game, and he had “Never give up” stitched into them.

He made the All-Star team for the first time in his 10th season.

“You always have to think you can make it,” Perez said.

Plenty has been written here about Perez, and more is coming.

The hope is that he will be on the Rangers Today Baseball Podcast soon, but for that to happen the Rangers have to hold onto him at the Aug. 2 trade deadline.

The guess here is they will.

And in advance of his podcast appearance, and because he’s just a good dude, his rookie card is the Card of the Week. 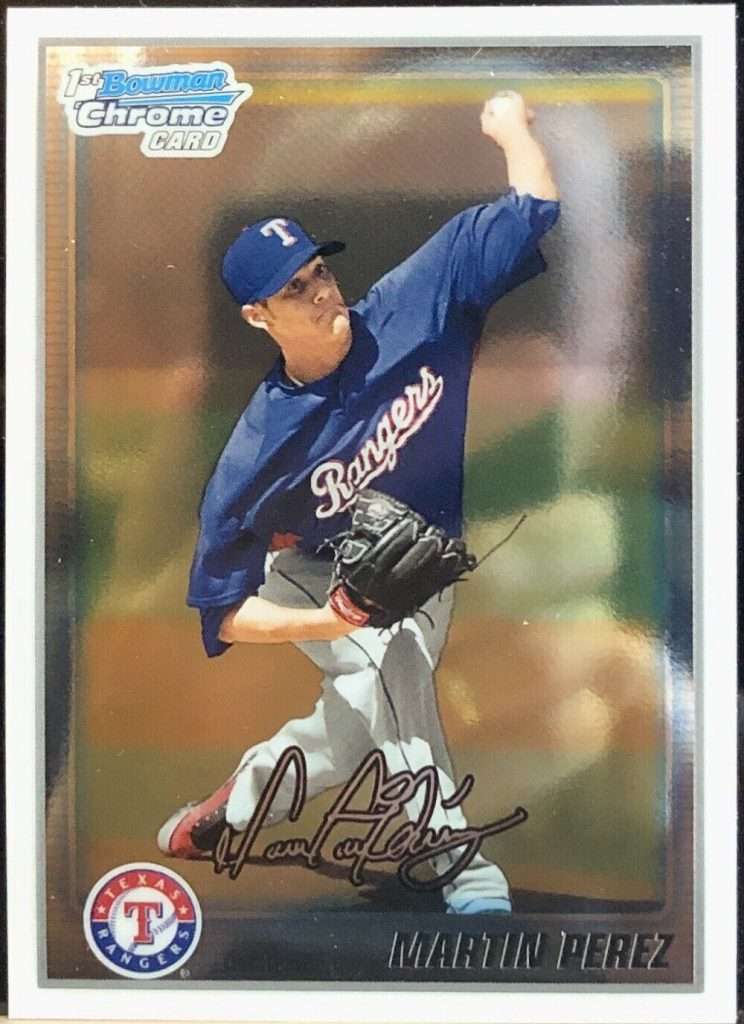 He’s so darn young in this card, only 19 and no sign of facial hair. The Rangers signed him at age 16.

They let him go once, after the 2018 season. It would be a shame if they did it again.

Brown nosing really isn’t worth it. Enjoy. See you Monday.

I got your downward dog right here…😏😂🐶🧘 pic.twitter.com/JlZ6g7mXZn