As free agency draws closer, more and more prediction columns are being published. The latest is from Jon Heyman from the New York Post.

He forecasts the Post’s top 30 free agents, which clubs could be interested and an “outside expert’s” prediction on contract value.

There are 11 or 12 starting pitchers on the list, depending on how teams view right-hander Zach Eflin, and the Rangers are linked to nine or 10 of them. The biggest financial outlay would be for left-hander Carlos Rodon, who is projected to get a five-year, $150 million contract. The large annual average value is Jacob deGrom at three years and $125 million.

The Post‘s expert predicts that left-hander Martin Perez will bag three years and $50 million. He’s probably not going to get that from the Rangers. He might get a qualifying offer for $19.4 million, which is $1 million more than the Post believes Clayton Kershaw will get from either the Dodgers or the Rangers.

Over at MLB Trade Rumors, they rank Perez in what their third tier of starting pitchers with free agents such as Tyler Anderson, Jose Quintana and Ross Stripling. The Rangers have done well there the past handful of years, and it wouldn’t be surprising for them to try again.

The Rangers are hoping to add at least two starting pitchers for the 2023 rotation, but free agency isn’t their only avenue. They have enough depth in the farm system to acquire a starting pitcher via trade.

I’m not sure how this one got past me, especially with how much I love it when the schedule for next season comes out. Back when I was covering 60ish road games a season, I had the schedule pretty much memorized and hotels booked for most of those games.

Anyhoo, the Rangers will face the two World Series teams within the first two weeks of the 2023 campaign.

First up will be the Phillies, who are opening the season March 30 at Globe Life Field. It’s a three-game series over four days, with the clubs off March 31 to recover from their Opening Day hangovers.

The Rangers head to Houston on April 14-16 for their second road series. The first is April 7-9 at Wrigley Field, for those who like the cold and dead ivy.

Which one will be the reigning world champs? We could know as soon as Saturday. The Astros won Game 5 on Thursday 3-2 to take a 3-2 series lead behind solid plays in the final two innings by first baseman Trey Mancini and center fielder Chas McCormick.

The one candidate for pitching coach who has been confirmed is Mike Maddux, the former pitching coach from 2009-2015. He might get the job or he might not, though it’s hard to imagine there is a better candidate out there.

He still lives locally, which is convenient for both parties.

And because this might be the only chance for him to appear in this weekly feature, there’s no time like the present. 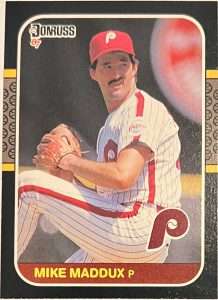 His rookie isn’t the only Maddux rookie in the ’87 Donruss set. Greg Maddux’s rookie card, a Rated Rookie, is card 499 cards sooner at No. 36.

Older brother Mike has the advantage in mustaches, though.

Why so happy? It’s Friday. Enjoy. See you Monday.

Previous Article
Texas Rangers notes: Movement toward a pitching coach, but what about keeping Martin Perez?
Next Article
Friday on the Farm: Tough news on the injury front as Aaron Zavala has elbow surgery

Friday on the Farm: Tough news on the injury front as Aaron Zavala has elbow surgery
Jeff Wilson November 4, 2022