Friday newsletter time: Rangers will stick with Hearn, who pitched with an illness in loss to Rays

ARLINGTON —  The improvement Taylor Hearn showed last weekend at Oakland appeared to take a turn for the worse Thursday afternoon.

He allowed three runs in four labor-intensive innings, walking three in the third inning alone. One of those walks pushed in a run.

Alas, it was revealed by manager Chris Woodward after the Rangers’ 3-1 loss to Tampa Bay that Hearn is sick and did all he could to make it as long as he did.

The start won’t be held against Hearn, Woodward said. In other words, Hearn is staying in the rotation despite lackluster results so far this season.

“He didn’t feel great after the second or third inning,” Woodward said. “After that third inning, when he walked three guys, that’s something he hasn’t done a whole lot of. Hopefully the next start he feels great and we can truly evaluate. But it’s tough to put too much into this one.

Hearn (3-4, 5.48 ERA) needed 89 pitches to get 12 outs. The inefficiency has been a recurring theme for Hearn, sick or not, but he felt as if he had made improvements between starts that would have kept him rolling.

Instead, his mechanics broke down in the third, possibly as the medication he had taken earlier in the day started to wear off and he lost steam.

“I tried not to let it affect me too much,” Hearn said. “I tried to do the best I could. I hate that physically I wasn’t able to do it.”

While Hearn has been the most inconsistent starter in the rotation, there aren’t many options to replace him.

Left-hander Brock Burke would need multiple short starts to get stretched out, and the Rangers might not want to take away one of their best relievers.

Left-hander Kolby Allard and right-hander Spencer Howard are, though, and Howard tossed five scoreless innings Wednesday night. He was sent down to get built up after a wonky spring, presumably with the Rangers intending to plug him back into the rotation.

Hearn, though, won’t be going anywhere after pitching sick Thursday.

Another test for Smith

His first major-league at-bat was probably the biggest moment of his professional career, but the most important plate appearance of Josh Smith’s young career came in the 10th inning of a tie game Wednesday night.

Two outs. A base was open. A hit would have won the game, but he wasn’t going to get any good pitches to hit.

Maybe Smith knew that entering the plate appearances. If not, he quickly figured it out.

He didn’t win the game, but he didn’t lose it. Or his cool.

He worked a walk, taking a tight 3-2 pitch from left-hander Colin Poche.

It was enough to convince Woodward that Smith could handle leadoff duties Thursday in the finale against Tampa Bay.

“I don’t want to overwhelm the kid, but it doesn’t seem like anything is really bothering this guy,” Woodward said. “In that situation, that was just a really good at-bat. He didn’t seem to be bothered by the moment.”

Smith responded with a leadoff double against Corey Kluber, who tossed a no-hitter the last time he was at Globe Life Field last season with the Yankees. Smith has played in all four games since being promoted from Round Rock, starting three times, and has reached in all four.

The Rangers’ offense couldn’t deliver a timely hit for the second straight loss, and they settled for a split with Tampa Bay.

The Rangers needed a leadoff hitter with Corey Seager on the bench. His absence pushed Marcus Semien from the leadoff spot to the No. 2 hole. Semien, who hit his first homer of the season Saturday at Oakland, connected for his first home run at Globe Life Field.

Smith batted eighth in his first two stats and will likely bat eighth or ninth when Seager and Semien are in the lineup.

Bubba Thompson woke up reasonably early Wednesday morning and hopped on the Texas Rangers Baseball Podcast. The episode is in production and will be dropping soon.

As has been the case throughout the podcast’s existence, I try to add one of the guest’s baseball cards. I was successful once again.

The Card of the Week is the 2017 Bowman Draft Chrome Bubba Thompson 1st Bowman refractor. 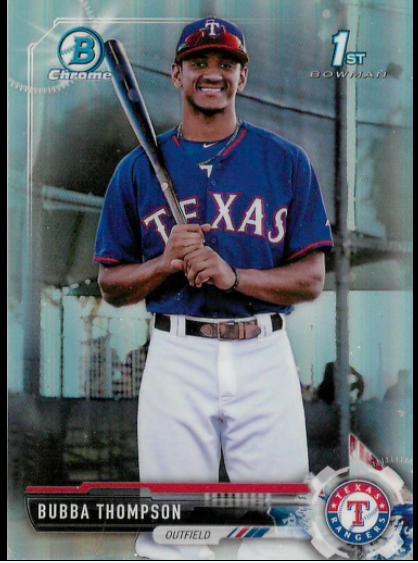 If anybody has a guess, lay it on me.

Rangers Today is going on vacation. We’re loading up the family truckster and heading east. There will still be fresh content posted throughout the week, just not every day, but enough to still make a monthly ($5.99) or an annual ($60) subscription worth your while.

We’re also not going to be shooting a new Texas Rangers Baseball Podcast, which will give everyone a chance to catch up on what all we’ve been doing in the Roxo Media House studios in Fort Worth.

I think I will take a nap this weekend. Enjoy. See you June 13.

Previous Article
Thursday newsletter time: Rangers waste strong outing from Jon Gray in extra-innings loss to Rays
Next Article
Friday on the Farm: Promotions are coming. Here are the top candidates to get a bump

Friday on the Farm: Promotions are coming. Here are the top candidates to get a bump
Jeff Wilson June 3, 2022