ARLINGTON —  Jon Gray gave the Rangers’ bullpen a bit of a reprieve Wednesday night, as his seven scoreless innings gave most of the bullpen the night off.

The thinking was that Martin Perez would pitch deep into the game Thursday, giving the relievers another easy night.

Perez, though, was lucky to get through five innings even though he allowed only one run.

Still, he left with a four-run lead.

That should have been enough. It wasn’t.

The Rangers’ bullpen is running on fumes. Their most trusted relievers have pitched too much behind a rotation that hasn’t provided enough innings.

It showed as Seattle pumped out five runs across the seventh and eighth innings against four relievers.

The Rangers’ bats again fell mostly silent after taking an early lead, and the result was a 6-5 loss to open a four-game series against the red-hot Mariners.

The Rangers are now a dreadful 5-19 in one-run games.

Guess what? The game tonight is likely to be some form of a bullpen game for the Rangers with Taylor Hearn and A.J. Alexy working multiple innings.

Any chance they get rained out?

It wasn’t all the bullpen’s fault. Seattle was gifted their first run as center fielder Leody Taveras misplayed a Sam Haggerty line drive that turned into an inside-the-park home run. Taveras was also caught stealing to end the Rangers’ three-run first as they had Marco Gonzales on the ropes.

The Rangers will have two players on the American League All-Star team after Corey Seager was added to the roster as an injury replacement for George Springer. Seager will join Perez, who was selected Sunday.

Seager is also going to participate in the Home Run Derby.

He will be playing at Dodger Stadium for the first time since leaving Los Angeles behind for a 10-year, $325 million deal with the Rangers. He said doesn’t know what to expect from Dodgers faithful.

“You don’t know how the emotions are going to be until you get there,” Seager said.

The reigning AL Player of the Week delivered again for the Rangers on Thursday with two RBIs.

Who is that guy?

The Rangers purchased the contract of Triple A Round Rock outfielder Elier Hernandez on Thursday because they needed a right-handed hitter to counter the Mariners’ two left-handers this series and to pinch hit if needed against a lefty reliever.

The plan worked, as Hernandez collected the first two hits of his big-league career against the left-handed Gonzalez.

Hernandez, a career minor-leaguer after being a coveted international prospect in 2011, was the choice over infielder Ezequiel Duran and outfielder Bubba Thompson. Woodward said the Rangers are riding the hot hand, and Hernandez was batting .331 with a 1.043 OPS and 10 homers since May 1.

The 27-year-old has 3,898 career plate appearances in the minors. Hernandez reaching the majors is a cool story.

He took the roster spot of outfielder Steve Duggar, which won’t hurt too many fans’ feelings.

The Rangers also welcomed Hearn back on the taxi squad ahead of his expected appearance Friday as the Rangers’ bulk pitcher. He’s not going to start, but he is going to pitch multiple innings.

Also on hand is right-hander Jonathan Hernandez, whose return from the 60-day injured list is imminent. That could be bad news for … Elier Hernandez, who is one of the more expandable players on the 40-man roster. After the week Kolby Allard has had, the Rangers might be able to get him through waivers.

The fine folks at Dallas Card Show are hosting another massive show this weekend at the Watters Creek Convention Center in Allen, with more than 600 tables. The show starts today and runs through Sunday.

My quest for the 1960 Topps Mickey Mantle All-Star card continues. It’s the last card I need to complete the set my dad started when I was a kid. I’m working on the ’62 set, and have the Mantle All-Star but not his regular card.

But I’ll have the boy with me, so funds will likely go toward his collection. He was very fired up to hear that Seager was added to the All-Star team.

So, my guess is that Seager’s rookie card is on the list. The 2012 Bowman Chrome auto is out of our price range, but the Card of the Week isn’t. 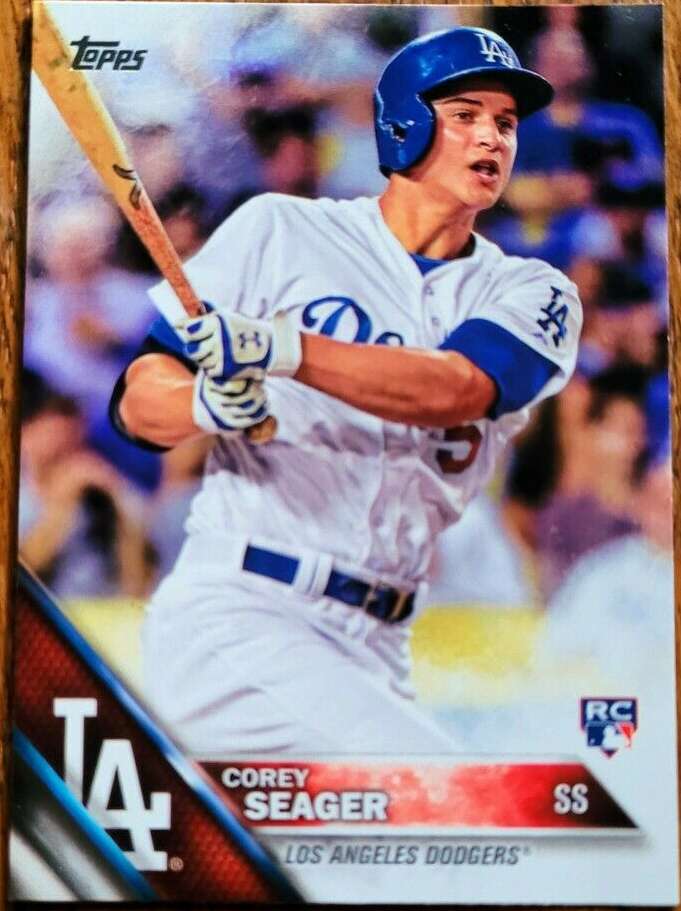 The boy reports that Seager has jumped to a 97 rating on MLB the Show 22, which is how he evaluates players in real life. There are worse ways, I guess.

Smart dog! Wait for it … 😄#DogsOfTwitter

Previous Article
Leody Taveras confidently rolling in the right direction as Rangers’ center fielder
Next Article
Friday on the Farm: Owen White, Rangers’ hottest prospect, wants to get you out … and your mother

Friday on the Farm: Owen White, Rangers’ hottest prospect, wants to get you out … and your mother
Jeff Wilson July 15, 2022