This was a nice, little surprise in the email inbox and Twitter feed shortly after finishing up my workout: The Rangers will be hosting the 2024 MLB All-Star Game at Globe Life Field.

My son is already making plans for the Home Run Derby and what will be the 94th Midsummer Classic on July 16, 2024.

It shouldn’t come as a surprise that the Rangers were picked. MLB likes to reward teams that build new ballparks with marquee events. This was just a matter of time, especially after the Rangers showed their worth by hosting the MLB playoffs during the COVID season in 2020.

The cities of Arlington and Fort Worth are teaming up on hosting duties. Dallas had already scheduled a couple of big-time conventions, so it will be an all-Tarrant County affair. Nothing wrong with that.

A couple things stood out from the media availability:

• The Rangers are planning to host most, if not all, of the fan experiences in the Arlington Entertainment District. The MLB All-Star Parade, which isn’t as grand as you think, could be held by weaving through hotels and various sports facilities. The former Globe Life Park, now Choctaw Stadium, could also be utilitized along with the E Sports Stadium.

The two Loews hotels, one of which is under construction, will likely be reserved for players and MLB staff.

• Not to get political, but some questions were asked about how MLB took the All-Star Game away from Atlanta in 2021 because of the voting legislation Gerogia had passed. Texas has a similar law, and Gov. Greg Abbott wasn’t very cordial in the aftermath of MLB’s decision by turning down his invitation to throw out the first pitch for the Rangers home opener.

The Rangers said there has been no discussion with MLB about voting laws. Georgia saw record numbers of early voting leading up to the 2022 midterms and no decrease in overall turnover over the 2020 election. Also, the vote went against some candidates who supported the removal of the game. I’m looking at you, Stacey Abrams.

Moving the game (to Colorado) is among the many things that have worked against the popularity of MLB commissioner Rob Manfred and MLB in general. He made the announcement that the Rangers would be hosting the 2024 at the owners meetings and was not asked about the voting law.

• The Rangers last hosted the All-Star Game in 1995, a game that is remembered for the sweltering heat at the old ballpark. Globe Life Field comes with a retractable roof, but the Rangers and MLB have not had a discussion about the state of the roof for the 2024 game. Executive vice president Rob Manfred was with the Astros when they hosted in 2004, and he said the roof was open for the Home Run Derby and closed for the game.

Let’s just go ahead and make the decision: It’s going to be closed for the game.

An MLB offseason is filled with all kinds of deadlines.

On Tuesday teams had to set their reserve lists, also known as the 40-man rosters. This came after the deadline for players who were given qualifying offers to accept or reject the one-year, $19.65 million contract.

Another deadline arrives this evening — the tender deadline. Basically, teams have the opportunity to not tender contracts to unsigned players. Those are the players eligible for salary arbitration.

After filling up their 40-man Tuesday by adding six prospects in order to protect them from the Rule 5 roster, the Rangers need roster spots and this is an opportunity to create one or two. It would seem that Martin is the best candidate, though the Rangers aren’t in a place to start shedding pitchers. Garver could be if the Rangers want to go with Jonah Heim and Sam Huff at catcher.

Dennis Santana was a non-tender candidate before the Rangers traded him to the Braves.

There are others on the 40-man who are candidates to lose their spots once the Rangers start adding free agents. It’s going to happen at some point.

Justin Verlander was the unanimous winner of the American League Cy Young Award. I was one of the 30 voters. I followed Verlander with Alex Manoah, Shohei Ohtain, Dylan Cease and Shane McClanahan. I have buyer’s remorse over not having Framber Valdez on my ballot.

Anyhoo, the Rangers have never had a pitcher win the Cy Young. You might have picked that up from the latest T.R.’s Memoirs. They came close in 1974 with Ferguson Jenkins, who finished second to Catfish Hunter as the A’s were finishing off their three-year run as World Series champs.

In honor of Jenkins’ terrific season, the best by a Rangers pitcher, the Card of the Week is the 1966 Topps Ferguson Jenkins rookie. 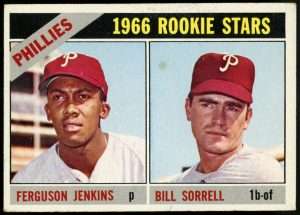 As was the case in that era of cards, Jenkins shared the card with another player, outfielder/first baseman Bill Sorrell. Jenkins ended up in the National Baseball Hall of Fame.

Sorrell? Billy, as he was better known, played parts of three seasons with three teams over a five-year span. He had 165 career at-bats and five home runs, four of them with the 1970 Royals.

Me on Wednesday, falling asleep in my car before the Martin Perez media availability.

Previous Article
Thursday newsletter time: Is there a long-range plan with Rangers associate manager Will Venable?
Next Article
Friday on the Farm: Recapping the first taste of pro ball for Kumar Rocker, Brock Porter