With all the talk about the Rangers adding starting pitching, which they have already done this offseason with plans to do more, the idea of picking a hitter has been pushed to the back burner.

Our resident fan nerd, John Moore, threw out some ideas Wednesday in his latest Armchair GM.

Aaron Judge is not coming through that door. Neither is Carlos Correa or Trae Turner, not without a position change. Brandon Nimmo will need a boat load of years on his deal.

There are trade targets out there, too, but we’ll stick with the free agents.

Judge, Nimmo, Conforto and Gallo are outfielders, and that’s the position (left field specifically) where the Rangers can add. Gallo likely would have the most inexpensive deal, and his best seasons have been in Arlington.

This has the feel of short-term deal, maybe a year or two, so that the Rangers could turn to Aaron Zavala or Dustin Harris.

Maybe the Rangers will address that next week.

The next newsletter will be penned from San Diego, site of the 2022 winter meetings next week and the city that should host all major MLB events.

It really is a perfect setup. The airport, while not great, is downtown, hotels are in close proximity to Petco Park (including the Left Field Marriott), the Gaslamp Quarter has all a growing sports writer needs, and the weather is hard to beat.

The 2019 meetings, the last held because of COVID and the lockout, were in San Diego. The big signings that year involved Gerrit Cole and Anthony Rendon, and Cole going to the Yankees might have led to Rendon going to the Angels. Owner Arte Moreno badly wanted Cole to come to Anaheim, and when he didn’t, Moreno was hot and in a mood to spend.

Rangers fans should expect a lot of smoke next week. The Rangers will be linked to many free agents, as they have already been. They might not sign anyone, as has been the case in most years since I started covering the team at the 2007 winter meetings in Nashville.

And then there’s the Rule 5 draft Wednesday. The Rangers could see a prospect or two lost.

It’s going to be busy, even if the Rangers don’t do anything.

Some said news broke Thursday morning, and it touched the Rangers as Hall of Fame pitcher Gaylord Perry passed away at age 84.

Perry made his mark with other teams, but he made 112 starts with the Rangers over parts of four seasons in two stints. You could make a pretty good argument that no pitcher has had a better Rangers tenure.

But turned 37 when he joined the Rangers in 1975 in a trade with Cleveland. He was on his way to 42 when the Rangers had him in 1980 but sent him to the Yankees for right-hander Ken Clay and outfielder Marv Thompson.

In honor of Perry, the Card of the Week is his 1976 Topps in a Rangers uniform. 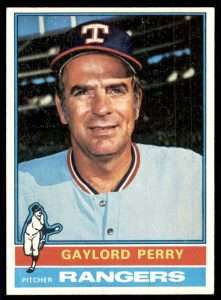 If we’re being honest, Perry looks pretty close to 84 in this card. I have his 1962 rookie card, but it’s not a photo so much as a painting. All the ’62 rookies, including Lou Brock, are like that.

Brock and Perry both ended up in the Hall of Fame. Perry won 314 games over 22 seasons and finished with a 3.11 ERA.

Like a basketball coach calling a timeout to stop a run. Good boy. Enjoy.

Good boy got escorted out of the jiu-jitsu match for protecting the owner…🐕🐾🥋😅 pic.twitter.com/zYwsIU3Msx

Previous Article
T.R.’s Memoirs: Another chance at Hall for Rafael Palmeiro. He has the stats, but …
Next Article
Friday on the Farm: Trading prospects is not fun, but Rangers have plenty for right deal

Friday on the Farm: Trading prospects is not fun, but Rangers have plenty for right deal
Jeff Wilson December 2, 2022