Friday Newsletter time: Tired or not, Taylor Hearn gave Rangers his best outing of the season

ARLINGTON — To answer a burning question from Thursday night, Texas Rangers left-hander Taylor Hearn was removed after five scoreless innings and only 64 pitches because he hadn’t pitched since May 1, had pitched only once in 15 days, and his stuff was showing signs that he was fatiguing.

That was according to manager Chris Woodward, who was thrilled with what Hearn did in a 3-1 win over Kansas City — one hit, three walks and five strikeouts.

Hearn said in the clubhouse, though, that he felt fine and could have gone another inning. But he gets it after the long layoff. Also, he didn’t go past five innings in his first five starts, and spring training was shortened.

It’s water under the bridge now after four relievers finished off the Rangers’ seventh win in their past 10 games. Their runs came via a bloop (by Kole Calhoun in the first), a blast (by Brad Miller in the seventh) and a frenzied run around the bases (by Adolis Garcia in the eighth).

Barring another string of rainouts, which won’t happen because Globe Life Field has a roof, Hearn should pitch again on normal rest Tuesday against the Angels.

“Whatever they tell me, I’m going to do it,” Hearn said.

He attacked from the outset, finally doing what Woodward was seeking in the first month. Hearn struck out two in a 1-2-3 first inning and sat 92-95 mph with his fastball throughout.

Hearn threw all of his pitches for strikes, getting strikeouts with his slider and four-seamer. It was his best outing, even though it wasn’t his heaviest workload.

“He just let it all hang out every pitch from the first inning on,” Woodward said. “You could see the velo was up. It only started going down at the end. We kind of expected that. Going in we weren’t sure how he was going to respond after being down so long, but I thought he did great.”

Leody Taveras didn’t play the first two games of Triple A Round Rock’s homestand Monday and Tuesday after being removed early from a game Sunday at Reno.

He wasn’t hurt, the Rangers said, and it was a manager’s decision to keep Taveras out of the lineup.

No one has said with any certainty why Taveras was down, but apparently Round Rock has a rule that all players will run out popups as if they had stolen something.

Taveras might have been running like he just popped up and was unhappy with it. If so, he probably wasn’t happy with sitting two games.

Taveras returned Wednesday as Round Rock was dismantled 19-0 by Oklahoma City. He went 0-for-3, snapping a 17-game hitting streak.

The 2022 Bowman cards were released last week, and, to the surprise of many, there is not a Jack Leiter card. There are four Rangers among the chrome prospect list — Jose Rodriguez, Luisangel Acuna, Max Acosta and Dustin Harris.

Harris is the only one not in A ball. He is playing left field at Double A Frisco after playing most first base in his breakthrough 2021 season that saw him named Rangers Minor League Player of the Year and catapulted him to into the top 10 on Rangers prospect lists.

Harris, Zion Bannister and the since-traded Ronny Henriquez are the three Rangers Chrome prospect autographs. Acosta is featured on other auto cards, including a dual-auto card with Acuna. Cole Winn and Josh Jung autos can also be had.

But Harris appears to be the most coveted card because it’s his first Bowman. I got one Thursday on eBay.

The 2022 Bowman Chrome Prospect Dustin Harris is the Card of the Week. 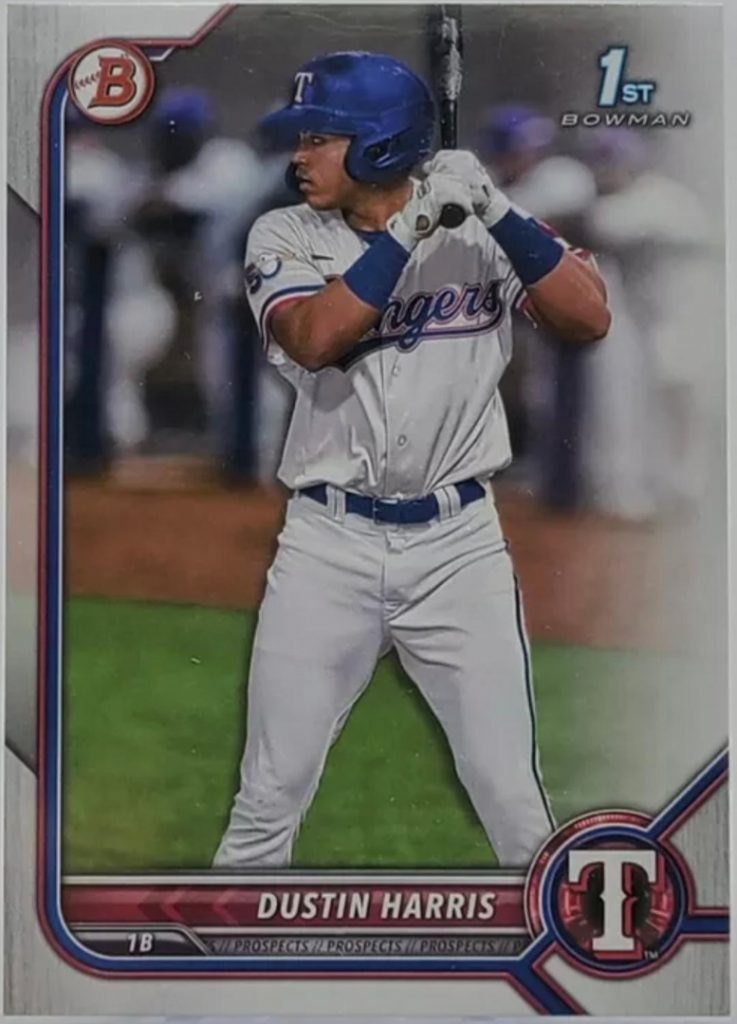 The problem with Bowman is that the prices on hobby and jumbo boxes are through the roof. Really, it’s that way for all cards, but especially so for Bowman. So, rather than drop $400 or $500 on a hobby box, the smart choice here is just buying what I want — including an auto.

Getting down is always the tricky part. Enjoy. See you Monday.

Previous Article
Thursday Newsletter time: Ian Kinsler headed to Rangers Hall of Fame as homegrown inductee
Next Article
Friday on the Farm: Acuna gets plenty of help from famous brother, but wants to do own thing

Friday on the Farm: Acuna gets plenty of help from famous brother, but wants to do own thing
Jeff Wilson May 13, 2022