Friday newsletter time: The biggest Rangers story right now is unfolding in another A town

The crowd who grew up watching Looney Tunes knows that Bugs Bunny always got lost and ended up in some foreign land or crazy situation because he took the wrong turn in Albuquerque.

That’s where many Rangers fans have turned their attention to this week.

Triple A Round Rock is on the road, and Josh Jung was the starting designated hitter Thursday after playing third base the first two games of the series. The hope of those who have been following Jung’s road back from February shoulder surgery is that he is the starting third baseman for the Rangers beginning tonight to open a three-game home series against the Tigers.

Rangers Today has an interest in the decision, too, after traveling in July to see Jung in Arizona. Rangers Today was the first to see him playing third base and have him explain that it was part of the plan for him the rest of the season, something Rangers brass had said was not going to happen.

He is now on the cusp of his big-league debut. It’s not a matter of when, not if, but the when has people up in arms.

Could that be today? Sure. Planes go to and from Albuquerque daily, and it’s a short flight.

Will it be today? Not so sure. The Rangers’ plan all along might have been him to play six straight days as a final test to show that he’s physically ready. Maybe they wanted to see him struggle a tad (he’s 2 for 14 the past three games) and see how he responds.

Ultimately, a few more days isn’t going to hurt anyone. It’s not like the Rangers are in playoff contention.

This was pointed out last week: The Rangers and Round Rock are off Monday. Jung could head back to Round Rock with the team, pack his bags and drive up Monday at his leisure. The announcement could be made Monday to give fans a day’s notice in order to buy tickets for the debut.

It’s widely assumed that even the Rangers have enough business sense to plan Jung’s debut to be at Globe Life Field.

A weeknight game during the school year, even against Astros, could use a little help drawing fans.

All we can do is wait to see when Jung turns at Albuquerque and heads the right way.

The Rangers have their starter named for Friday. It’s right-hander Glenn Otto, who has been better of late and is positioning himself nicely for 2023.

Not announced, though, are the starters for Saturday and Sunday.

It would be hard for the Rangers to not give Kohei Arihara one of those starts. The right-hander has done nothing to deserve getting demoted — or worse — following two competitive outings. But baseball is a business, and the Rangers might decided they need to open a 40-man roster spot for …

The left-hander has been solid in four starts, posting a 2.31 ERA and a .163 opponents average. He has not been solid in the majors this season, with an 8.53 ERA in 12 starts.

Cole Ragans and Arihara could make the Saturday and Sunday starts, with Dane Dunning and Martin Perez going Tuesday and Wednesday and Keuchel staying with Round Rock. Ragans is facing an innings limit at some point this season.

It could be Ragans and Keuchel, with Arihara going to the bullpen.

If it is Keuchel, maybe Jung can be his travel companion.

A trip to Frisco produced three interviews that should lead to three Friday on the Farm features — Justin Foscue, Aaron  Zavala and Luisangel Acuna.

First of all, Acuna was better during this interview than in spring training, where it appeared the last thing he wanted to do was talk to two sportswriters. Maybe it was the fact that Ornelas was the translator instead of Arizona Complex League manager Carlos Maldonado.

The word is that Acuna has a much different personality than his older, more famous brother, Ronald Acuna Jr. Luisangel is reserved and would rather play video games than go out on the town, whereas Ronald soaks up the spotlight.

It would seem, then, that having a baseball card or two is no big deal for him.

But it’s a big deal for Rangers Today, and his 2022 Bowman Virtuosic Vibrations is the Card of the Week. 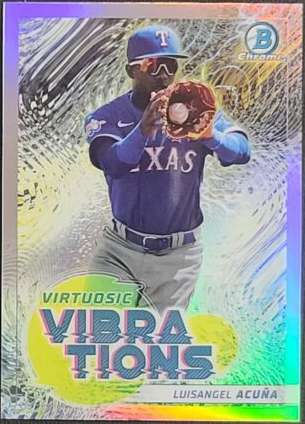 This card is in my son’s collection. He’s a huge fan of Ronald Acuna Jr. and seems indifferent on the fact that his favorite player’s brother is in the Rangers organization.

He’ll appreciate it some day.

It’s the weekend. Be happy! Enjoy. See you Monday.

Previous Article
T.R.’s Memoirs: Looking back at the Rangers’ greatest plays of the past 50 years
Next Article
Friday on the Farm: Is Luisangel Acuna, a top-100 prospect, underrated? Rangers think so