So much hype surrounded Jurickson Profar as he was rising through the Rangers’ system to the major leagues that his career is seen by many, at least in these parts, as being a bust. The two years missed because of shoulder injuries certainly didn’t help his career path.

But Profar is still standing, 10 years after making his big-league debut, and he’s back in the postseason with San Diego after batting .243 with 15 homers and 36 doubles. He can become a free agent this offseason depending on what happens with the options on his contract..

The Padres are tied 1-all with the Dodgers in a best-of-5 National League Championship Series. They won Game 2 on Wednesday even though Profar swung at the lowest pitch in MLB history.

Profar flailed at a Clayton Kershaw curveball that bounced around five feet in front of home plate. According to research done for the great Jayson Stark, the pitch would have finished 2.19 feet below home plate traveled 60 feet, 6 inches.

Profar and Kershaw have some history dating to last season, when Profar tried to stab a fastball and actually drew catcher’s interference. That didn’t sit well with Kershaw, who told Profar exactly what the thought about the season.

Profar had the last laugh, driving in the go-ahead run later in the 5-3 victory.

The Houston Astros are a victory away from keeping the Seattle Mariners as the only franchise in the major leagues that hasn’t played in the World Series.

See, Rangers fans: It could be worse.

The Rangers, who are riding a streak of six consecutive losing seasons, went to the Fall Classic in 2010 and 2011. They punched their ticket in 2011 on Oct. 15 (that’s tomorrow) with a 15-5 win against Detroit in Game 6 of the American League Championship Series.

The  Tigers’ starting pitcher that day? Max Scherzer, and he had a 2-0 lead after two innings. He never made it out of the third, though, as the Rangers six runs in 2 1/3 innings against the future Cy Young Award winner.

The Rangers scored nine times in the third, when Michael Young had two two-run doubles. Young later had a home run, as did ALCS MVP Nelson Cruz.

Cruz, by the way, recently said on Instagram that he hopes to continue playing next season even though is 42 and will turn 43 on July 1.

There’s no real need to discuss what happened in the World Series. Rangers fans will never forget, and some of the them will never forgive Cruz or manager Ron Washington for the devastating loss in Game 6. If Washington isn’t a candidate for managerial openings around baseball, including the Rangers’ opening, he should be.

The Rangers, of course, seem to be leap years from going back to the World Series even though club brass has said they expect the Rangers to be playoff contenders in 2023. The key to that will be how much starting pitching is acquired this offseason.

But the rotation will have a hard team matching the 2011 Rangers rotation. That group — Colby Lewis, Derek Holland, Matt Harrison, Alexi Ogando and C.J. Wilson — avoided the injured list all season and pitched well in the regular season.

The annual Do It For Durrett Foundation event is tonight at Four Corners Brewery in Dallas, where a good time will be had and a bunch of money will be raised for area families affected by sudden loss.

Many former Rangers remain actively involved in the foundation, either by their presence or through their generosity with autographed memorabilia. Ron Washington, who gathered a massive haul for use this year, was featured as last week’s Card of the Week.

But he’ll be in Philadelphia tonight as Atlanta plays the Phillies in the National League Division Series. It’s a good thing that he’s not able to attend, though, of course, we’d love to have him.

Lewis will be there, and it’s rare for him to miss an event. He was one of Richard Durrett’s favorite players to cover, a message that was relayed to Colby shortly after Richard passed in 2014. 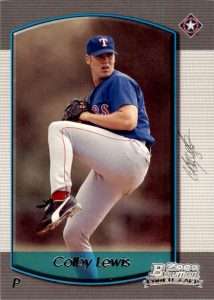 There’s a rumor floating around (actually, I’m starting it) that Lewis will be on the next episode of the Rangers Today Baseball Podcast. Stay tuned. Better yet, subscribe to the YouTube channel.

Escape for the weekend. Enjoy. See you soon (probably Monday).