Jacob deGrom put on a Rangers jersey Thursday afternoon, so it must be real.

Even he said that his introductory press conference at Globe Life Field and donning No. 48 made his decision start to sink in.

He said the right things, namely that he’s healthy and ready to make 30-plus starts a season. That’s the most important thing for him the next five years.

But the most powerful thing said didn’t come from deGrom.

Manager Bruce Bochy provided the best sound bite of the presser in regards to the Rangers’ chances at contending in 2023. With deGrom atop a pitching staff that includes Martin Perez, Jonathan Gray, Andrew Heaney and Jake Odorizzi (and potentially others yet to come), Bochy likes the Rangers’ chances.

Bochy’s three World Series winners in San Francisco had terrific starting pitching, with Tim Lincecum, Matt Cain and Madison Bumgarner. Bochy knows how far a quality rotation can take a team, and the Rangers now have an ace who can lead the group.

One of the more interesting things deGrom said came afterward in the brief scrum with the beat writers. Dr. Keith Meister, the Rangers’ team physician, was the orthopedist who reviewed deGrom’s Mets medicals after he suffered a stress reaction last spring in his right scapula.

Meister is one of the leading experts with scapula injuries, and deGrom said on the upcoming Rangers Today Baseball Podcast episode that there is a comfort level that comes with having Meister with the Rangers.

The latest swipe at deGrom from the New York media comes from Newsday. Laura Albanese didn’t care for his answers to questions from the media, particularly that he wants to win with the Rangers. They won 68 times in 2022 while his former team, the Mets, won 101.

He tarnished his Mets legacy, Albanese wrote. How could he not even consider a Mets counteroffer? He should have said goodbye before being “bailed out by a reporter” about how difficult it is to leave a team (I asked the question).

All the while, though, Albanese said it was deGrom’s right to do whatever he wanted and that no Mets fans is going to forget what he did for the franchise (two Cy Young awards, pitching in the 2015 World Series).

There is indeed a dissonance in play here, but it’s not on deGrom’s end.

New York isn’t everyone’s cup of tea. For someone to find a comfort level elsewhere and have a desire to be somewhere else is like a slap in the face to some New Yorkers. Steve Cohen’s money didn’t stack as high this time as another club’s, which apparently is unfathomable.

How hard did the Mets really try to keep him? Why weren’t they the aggressors? Did they take deGrom coming back for granted?

The reaction is typical New York media. This is simply pandering for clicks and retweets and the affection of Mets (or Yankees, when applicable) fans. I wouldn’t have seen it had Buster Olney, who I follow and who also made his mark in New York, not retweeted it.

Imagine what would have happened had Aaron Judge not re-signed with the Yankees. He would have gotten buried.

Instead, deGrom is getting the business from the back pages in New York, where folks find it hard to believe someone might want to be elsewhere.

The Rangers Today Baseball Podcast was fortunate enough to have deGrom and Mike Maddux on the next episode, which should be ready Friday or Saturday at our YouTube channel (subscribe).

The problem is that each of them has been featured in the Card of the Week, often the home to saluting podcast guests with their rookie cards.

So, we’re going to have to dig a little deeper this week. All the way back to last week.

Michael Young was the guest last week, and his episode is still the current episode. Let’s do this: It’s the 2000 Topps Traded Michael Young rookie. 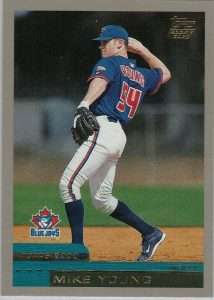 Check out the Blue Jays uniform, the knicker-style pants and the tight haircut. Young has always kept it pretty tight up top. His preference in pants, though, changed after he was traded in 2000. He eventually transitioned into pants that reached his ankles, not unlike the lululemon Commission Warpstream pants.

Henry Wilson is a knickers guy, so I am. But I’m also a lululemon guy, so I appreciate where Young is coming from.

Looking live at my plans for Friday. Enjoy.