HOUSTON — The paths of three players in the Texas Rangers organization crossed Thursday while cruising down old Route 59.

Former All-Star Matt Carpenter headed northeast from Sugar Land, where Triple A Round Rock was playing, caught I-45 and headed even further north to Fort Worth after being granted his release.

Catcher Mitch Garver was reinstated from the 10-day injured list and also headed out of the Sugar Land, right to Minute Maid Park before the opener of a four-game series against the Astros.

Garver’s arrival meant someone had to go. Nick Solak drew the short straw, not a reliever, and made the 30-minute trip to Sugar Land.

Solak was playing part time to start the season but was losing at-bats of late to Eli White, who has taken over in left field. Solak’s numbers dipped as his playing time dipped, and he headed to Round Rock batting .209 with a .607 OPS.

“It was a tough one,” manager Chris Woodward said. “He’s got to work on some things. He’s got to clean up some things from a swing standpoint. He was all-in. He wants to play right away.”

Solak will be teammates again with Willie Calhoun, who was sent to Round Rock on May 1 first after batting .136 to open the season.

There’s a trend there. The Rangers, as Woodward stated in spring training, will move out players who aren’t helping the team.

Marcus Semien is an exception.

But at least he has a track record of success. The same goes with Garver, who came off the IL hitting only .205.

If the trend continues it would make sense that Andy Ibanez could be the next player sent out. A case could be made that Ibanez, who was batting .187 with a .487 OPS, should have been sent out.

The Rangers, though, need him. He plays third base and first base, positions where the Rangers are thin.

“The versatility part of it was a big one,” Woodward said.

Ibanez was at first Thursday as the lefty-hitting Nate Lowe sat against left-hander Framber Valdez. Charlie Culberson was at third base.

The other third baseman is the lefty-hitting Brad Miller, who also plays left field.

There are third basemen at Round Rock. Davis Wendzel is there, but he entered Thursday hitting only .203. Josh Smith can play third base, but he is a natural shortstop who has only 529 career minor-league at-bats.

Neither player is on the 40-man roster. Ezequiel Duran is, and he’s tearing it up for Double A Frisco, but that seems like a long shot.

Right-hander Glenn Otto pitched six innings for the first time in the majors, allowing two runs in his first start in his hometown ballpark. The Rangers badly needed it.

The bullpen has been depleted during the stretch of 13 games in 12 games. Woodward said that the Rangers were down to two rested relievers — Josh Sborz and Garrett Richards.

Sborz worked a scoreless seventh but walked three batters in the eighth inning, and all three would score as the Astros pulled away for a 5-1 win. The big hit was a bases-clearing double by Martin Maldonado, who entered the at-bat hitting .112 but lined a hanging slider from Matt Moore into right-center.

The Rangers didn’t want to use Moore, either, unless it was in a winning situation. However, he took one for the team.

“Matt did a solid for us,” Woodward said. “We’ve got a lot of guys down tonight, and we’re trying to take care of our guys.”

The Rangers should be OK this weekend, and they have an off day Monday. They could get Albert Abreu (sprained ankle) back from Round Rock as soon as today, and the group that rested Thursday will be ready to go, too, with one exception.

Closer Joe Barlow is dealing with a blister, and he won’t pitch until that has healed. He could be a candidate to go on the IL.

Otto did yeoman’s work for the Rangers, recovering from a two-run first inning. He allowed seven hits and walked three, but he pitched well with runners on after the first inning.

“I’m happy I was able to get into the sixth,” Otto said. “I just found the zone, calmed down, got back to my game plan and simplified what I had to do.”

This is becoming a habit.

Whenever we have a player on the Texas Rangers Baseball Podcast whose rookie card my son and I don’t have, I head to eBay and buy one.

Such is the case for the Card of the Week.

Cole Ragans is the guest on our current episode, though a new one is due in the next 24-48 hours. Below is his first Bowman card, the 2016 Bowman Draft Chrome sky blue refractor. 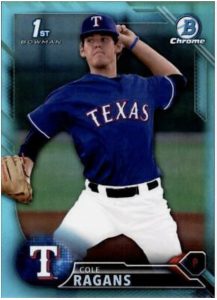 Ragans has been on twice now, though we didn’t purchase a card after his debut. However, we now are in possession of rookie cards of Davis Wendzel, Cole Winn and Dustin Harris. We already had Justin Foscue, Evan Carter and TK Roby.

Next up is Jon Gray, both on the podcast and our my collection.

Good thing for the Mavs that the Suns didn’t have this fella. Enjoy. See you Monday.

Previous Article
Matt Carpenter heads home to wait for a call. He’s OK if it never comes
Next Article
Friday on the Farm: Leody Taveras staying grounded as stock soars in Triple A

Friday on the Farm: Leody Taveras staying grounded as stock soars in Triple A
Jeff Wilson May 20, 2022