ARLINGTON —  Tony Beasley bounced into the media interview room Thursday morning with a smile on his face.

He’d received some advice from back home to not let his new job change him, and then realized that he hadn’t been himself since Chris Woodward was fired Monday and Beasley was selected to be the Rangers’ interim manager.

He’s usually energetic and care-free, but had been somewhat consumed by the more serious nature of his new job.

To heck with that.

“Today is the first day that I feel like myself,” he said.

All he wanted from his ballclub in the finale of a four-game series with Oakland was a clean game. No silly mistakes, no wasted at-bats, no mountain of walks issued.

Nate Lowe launched a three-run homer and Dane Dunning allowed two runs in six innings as the Rangers cruised to a 10-3 victory over the A’s and a winning record (4-3) on the homestand.

The Rangers also this week fired president of baseball operations Jon Daniels, replacing him with Chris Young. But on Thursday baseball prevailed over the off-the-field distractions.

“I think the whole day was a much more relaxed atmosphere,” Beasley said.

The team celebrated Martin Perez reaching 10 years of MLB service time, a significant milestone for any player. Beasley said that set the tone for the day.

Jonah Heim collected an RBI triple in the second, and newcomer Mark Mathias hit is first homer with the Rangers later in the inning. Lowe’s  17th homer of the season came in the fifth to put the Rangers up 7-2.

But Beasley said his favorite play was just before that, when Marcus Semien went from first to third on a Corey Seager single and Seager hustled into second on the throw.

“Our two main players really set the tone for us as far as hustle is concerned and effort,” Beasley said. “That was big, and we fed off that.”

The Rangers packed their bags and left for Minnesota after the game. Young was originally scheduled to be the executive on the trip, and he is expected to address the game about Daniels’ ouster this weekend.

Former Rangers shortstop Elvis Andrus landed with the White Sox on Thursday, the day after the A’s released him.

Andrus had lost out on playing time as the A’s wanted to see Nick Allen at shortstop, and Andrus voiced his displeasure. He wasn’t letting it affect him on the field, and he launched a two-run homer Tuesday against the Rangers in his final game with Oakland.

The A’s did the courtesy of releasing him two weeks before the deadline for a contending team to sign him and still have him eligible for the postseason. The White Sox are in third place in the American League Central, 2 1/2 games behind Cleveland and three games out of the final wild-card spot.

The White Sox are also without shortstop Tim Anderson, so Andrus will see steady at-bats. He’s also a veteran with playoff experience who can do good things off the bench if he slides into a backup role when Anderson returns.

I was kind of in no-man’s land this week when it came to Card of the Week. I don’t have a Young or Woodward card, and I don’t know if Beasley and Daniels have cards.

So, it was one of those weeks to pull another random card from the top of a pile in the Wilson card closet, and this sweet son of a gun was sitting on top. 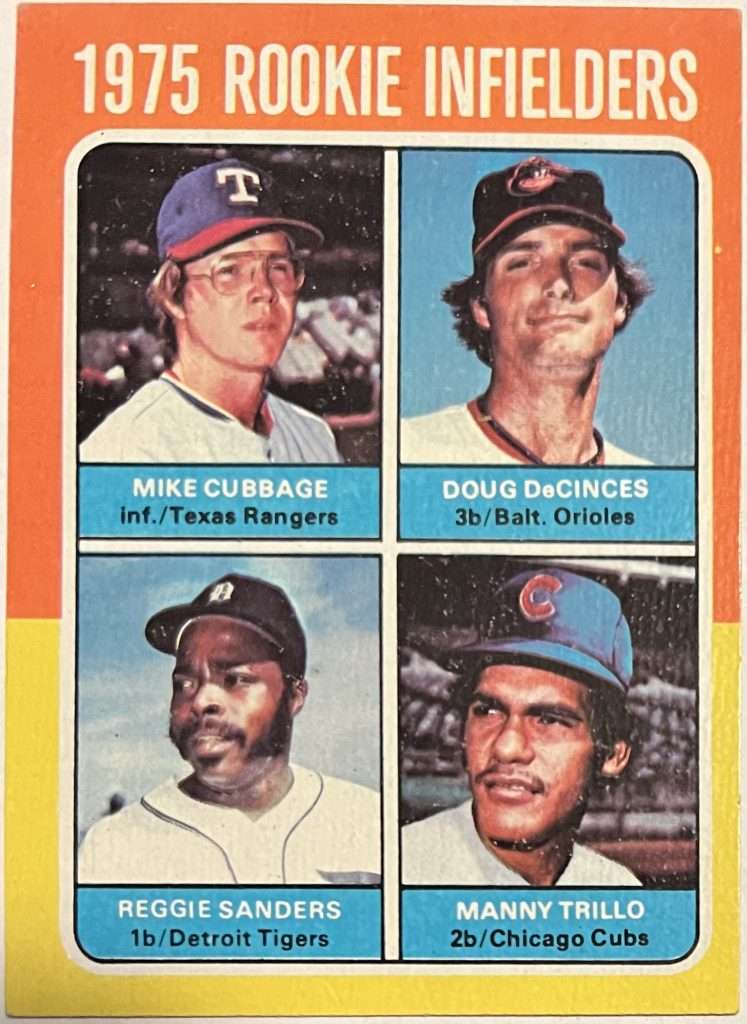 Which of the four rookie infielders had the best career?

Mike Cubbage spent parts of the first three seasons (1974-76) of his eight-season career with the Rangers, finishing with a 6.4 career WAR.

Doug DeCinces played for 15 seasons, the first nine with the Orioles and then six with the Angels. He finished third in MVP voting in 1982, winning a Silver Slugger, and was an All-Star in 1983. Career WAR: 41.7.

Manny Trillo played 17 seasons, debuting with Oakland before sliding over to the Cubs in 1975 and finishing third in Rookie of the Year voting. He was a four-time All-Star, won three Gold Gloves, two Silver Sluggers despite only 13 combined homers those seasons, and won a World Series with the 1980 Phillies. Career WAR: 11.2.

Trillo must be wondering, “WAR, what is it good for?”

Enjoy the ride this weekend. See you Monday. Enjoy.

Previous Article
Chris Young not celebrating being in charge of Rangers but trying to forge ahead
Next Article
Friday on the Farm: Fans are going to get Josh Jung, but on Rangers’ timeline (whatever that is)

Friday on the Farm: Fans are going to get Josh Jung, but on Rangers’ timeline (whatever that is)
Jeff Wilson August 19, 2022