Friday newsletter time: Latest left-field rumor might not be worth stretching budget

The best of the remaining free-agent left fielders is a familiar face, and the Rangers are reportedly keeping tabs on him.

It’s Jurickson Profar, the former top prospect in baseball from the Rangers system. He’s almost 30 now, regarded as a left fielder instead of an infielder, and is likely seeking a multiyear deal.

The best season of his career came in 2018, the last season before the Rangers traded him to Oakland in the three-player deal that brought back Brock Burke, Eli White and Kyle Bird. Profar hit 15 homers and 34 doubles last season with the Padres while batting .243 with a .723 OPS.

His bWAR was 3.1. That’s better than Bryan Reynolds.

A trade seems like the best route for the Rangers to acquire a left fielder. They are about $15 million away from the luxury tax threshold of $233 million. Profar wouldn’t take them over the top, but he would push them so close that the Rangers might not have enough money to take on a salary if needed at the trade deadline.

Any player acquired in a trade would come with a salary, but the theory is the Rangers would get a more affordable player than Profar or get their trade partner to pick up part of the player’s contract.

Profar can still play the infield and would be a handy guy to have around.

The guess here is that Profar doesn’t end up with the Rangers barring his willingness to take a reduced salary.

Four players have agreed to minor-league contracts with invitations to spring training, the club announced Wednesday, and the group of non-roster players is going to continue to grow.

Catcher Sandy Leon and right-handers Jacob Barnes, Kyle Funkhouser and Zack Littell joined infield/outfielders Yoshi Tsutsugo and Joe McCarthy on the camp roster. The Rangers have yet to announce their internal non-roster invites.

That list could come soon, however. First baseman Blaine Crim made it sound as if he will be one of them while recording the next episode of the Rangers Today Baseball Podcast. He was also a non-roster invite last season, along with infielders Justin Foscue and Davis Wendzel.

Some of the 2022 non-roster players have graduated to the 40-man roster. Among them are third baseman Josh Jung, infielder Josh Smith and outfielder Dustin Harris.

Those catchers are needed because a bunch of pitchers will be invited. Chase Lee was one last year, and it would be a surprise if he isn’t again this year. Kyle Cody should also get an invite.

A few minor-league starters, including Jack Leiter, would have been invited last year had it not been for the lockout cutting short big-league camp and reducing opportunities for guys who were unlikely to make the Opening Day roster.

David Bednar, I know and have been reminded, is a reliever for the Pirates who would be a nice addition for the Rangers’ bullpen in a potential Reynolds trade.

I had to be reminded by a few readers that it is, indeed, David Bednar and not Will Bednar, as I wrote in the latest Sunday Read.

So who is Will Bednar and how did I get stuck on him? Well, here’s the Card of the Week. 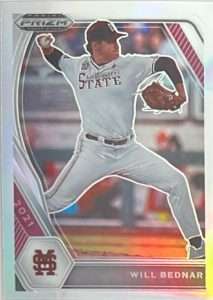 It’s the 2021 Panini Prizm Draft PIcks Will Bednar silver prizm. Bednar was a star in the College World Series for Mississippi State, pitching the Bulldogs past Vanderbilt in the clincher, but before that he became the Giants’ first-round pick.

He was teammates at Mississippi State with Foscue, who was the Rangers’ first round pick in 2020. Both were selected 14th overall.

Maybe that’s it. Either way, I think I’ve got it straight in my mind now.

Don’t get left out this weekend. Enjoy.

When all your friends are in the club but you were turned away at the door. pic.twitter.com/iVnPps3MrD

Previous Article
Thursday newsletter time: Rangers unveil minor-league coaching staffs. There are some key changes
Next Article
Friday on the Farm: Rangers have a bevy of talented pitching prospects. These six are the best

Friday on the Farm: Rangers have a bevy of talented pitching prospects. These six are the best
Jeff Wilson January 20, 2023