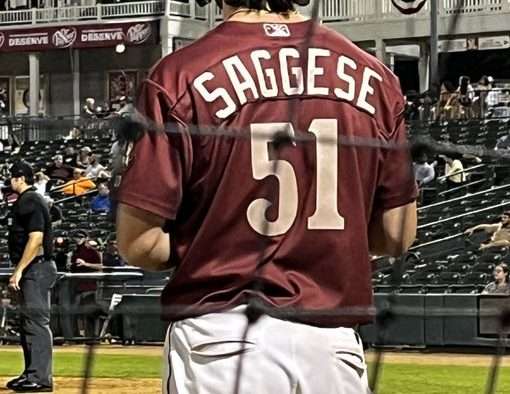 FORT WORTH — Double A Friday was in San Antonio on Thursday for Game 2 of the Texas League South Division playoff series, and won it that night for a sweep of the best-of-3 series.

Before the game, infielder Thomas Saggese put down his knife and fork and settled in for his first appearance on the Texas Rangers Baseball Podcast.

His appearance comes two weeks after his roommate, teammate and good buddy, Evan Carter, made his second appearance. Carter was told to warn Saggese that his day in the spotlight was coming.

The guy loves baseball. He said the grind of the season is fun. He enjoys the offseason workouts. If he isn’t doing something baseball related, he must be asleep.

The fifth-round pick in 2020, Saggese is a guy to watch the next few seasons.

To listen to the podcast, click on the Anchor embed at the top of the story or on one of the following links to popular podcast platforms:

Previous Article
The Sunday Read: ‘The process,’ Tony Beasley and the Rangers’ managerial search
Next Article
Monday newsletter time: Cleanup on Aisle 2, 4, 5 and 6. Rangers betrayed by defense in Sunday loss