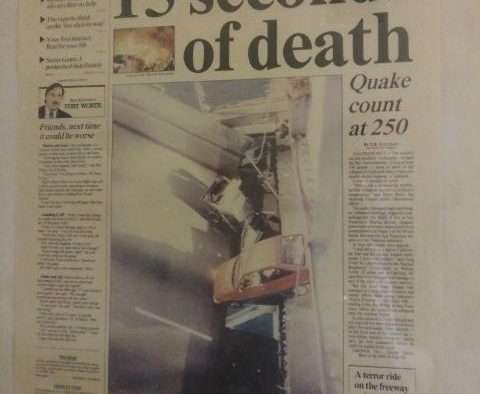 Editor’s note: T.R. Sullivan will be sharing his memories of covering the Rangers regularly in the Texas Rangers Newsletter. From the NOT forthcoming book: 32 years in Arlington, a baseball writer’s odyssey. T.R. covered the Texas Rangers for the Fort Worth Star-Telegram from 1989-2005 and for MLB.com from 2006-2020. He has covered more MLB games in Texas than any other sportswriter.

“The Bay Bridge has collapsed.”

Fort Worth Star-Telegram columnist Jim Reeves blurted that out while sitting next to me in the upper deck of Candlestick Park on Oct. 17, 1989.

I will never forget those words.

As Revo spoke them, a distant column of smoke could be seen beyond center field, rising high in the sky.

We would find out later the smoke came from a collapsed and life-crushing Oakland freeway.

I was still trying to comprehend what Revo had just said while watching his battery-powered portable television in the auxiliary press-box setup for the overflow of media covering the 1989 World Series.

T.R. is a Military Brat and graduate of the University of San Francisco who retired in 2020 after a 40-year career with the Denison Herald, Fort Worth Star-Telegram and MLB.Com. He covered the Texas Rangers for 32 years.

Previous Article
Three prep pitchers, three different journeys. A look at the top of Texas Rangers’ 2018 draft class
Next Article
T.R.’s Memoirs: 12 pitchers Rangers either had or could have had who could have altered franchise’s history

T.R.’s Memoirs: 12 pitchers Rangers either had or could have had who could have altered franchise’s history
T.R. Sullivan July 1, 2021