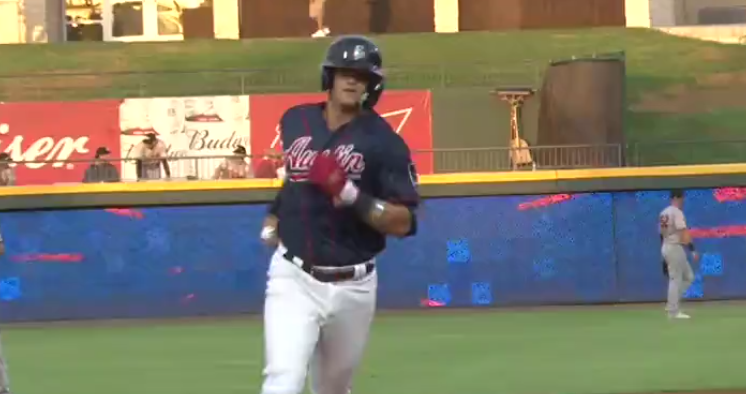 Don’t look now, but … actually, go ahead and look.

Josh Jung collected two three-run homers Tuesday night for Triple A Round Rock, and left the Express’ 6-4 victory batting .400 with a 1.464 OPS. Jung has collected four home runs is six games and 25 at-bats since his rehab assignment was transferred from the Arizona Complex League.

Oops he did it again 😎

It’s only Aug. 17 and it’s only 25 at-bat. A slump could take hold quickly, and maybe the Rangers want to see how he handles adjustments that might be made against him. Maybe the want to wait until rosters expand Sept. 1.

Jung is eligible for the Rule 5 draft after the season but will be added to the 40-man roster to protect him from the Rule 5. The Rangers can add him in the offseason, but adding him at some point over the final 46 games accomplishes the same thing.

He will enter the offseason projected to be the Rangers’ starting third baseman next season. That’s familiar territory for Jung, who has been injured shortly before the past two seasons and missed significant time.

He was lost this year in February, when the labrum in his left shoulder tore. He underwent surgery Feb. 23 and has progressed well enough to play in the field. The Rangers were not expecting him to play defense this season.

Now that he can, and now that he’s again decimating Triple A pitching, it feels only a matter of time until Jung is called up.

The Rangers needed a starter Tuesday night against Oakland, and the best they could come up with at Triple A Round Rock was Kohei Arihara. They are paying him $2.6 million this season, so maybe they wanted to get something for their money.

The right-hander allowed three runs in 5 2/3 innings. The problem is that it came on a night in which the Rangers’ offense missed out on prime chances to score in a 5-1 loss to Oakland.

Arihara allowed a run in each of the first three innings, and perhaps that shouldn’t be a surprise. Of the 39 runs he allowed a Round Rock this season, 19 of them came in the first inning.

That’s something he can work on before his next start. Arihara didn’t do anything to disqualify himself from staring Sunday at Minnesota, and no one else at Round Rock is knocking on the door.

Left-hander Dallas Keuchel, could be a possibility, though. His next start is scheduled for Saturday, so he Arihara would essentially be on the same pitching schedule.

Nate Lowe went 3 for 4 in the loss to the A’s and continued what has become a climb to a .300 batting average.

The first baseman went 3 for 4 in the loss to bump his average to .291. Lowe hits to all fields and against left-handers more so that right-handers.

Lowe has improved this season, though he isn’t walking nearly as much as he did in 2021. He wants to hit for more power, understanding the player profile for lefty-hitting first basemen.

Defensively, though, he needs make strides in order to not get sucked into full-time DH duty.

Me when I see a dog.. 😅 pic.twitter.com/n5VC8Xmhyf